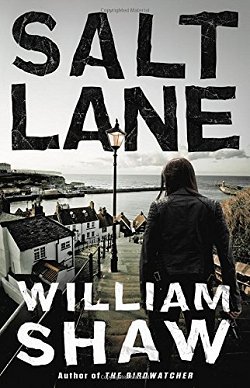 Detective Sergeant Alexandra Cupidi has done little to ingratiate herself with her new colleagues in the Kentish countryside. She had her first partner arrested on murder charges and now she's been assigned to look after a young constable named Jill Ferriter. Babysitting isn't the only thing on her agenda when a woman's body is found floating in local marshland. No one seems sure how the woman died or who she is.

And it gets stranger from there. Once the woman is identified and Cupidi notifies the next of kin, the man tells her that he'd never known his mother until a homeless woman knocked on his door, claiming to be his mother just the night before...at the same time her body was being dredged from the marsh.

Cupidi must discover who the dead woman really was, who killed her, and how she managed to connect with her long lost son, apparently from beyond the grave. It's not going to be easy; she's also got her aging mother and a misbehaving daughter to contend with.

Alexandra Cupidi first appeared in Shaw's superb The Birdwatcher. I loved that book even though I couldn't stand the character of Cupidi. I am thrilled to report that several of Cupidi's rough edges have been filed down in Salt Lane. She's still impulsive. She still shoots her mouth off without thinking, but with the most abrasive parts of her personality smoothed down, I was spending more time focusing on the investigation and the other characters and less time fuming about Cupidi's behavior.

Shaw knows just how to get readers involved with his characters. Alex is trying to fit in with her new community. She's even joined a book club, and her opinion of the chosen crime novel doesn't surprise me a bit. But it's her reaction to the landscape that is most telling to me. While her daughter Zoë has completely embraced the marsh, Alex looks around and sees that "the sheer scale of nature here was awesome; disturbing," and when she must go out into nature, she is completely out of her element. And speaking of Alex's daughter, Zoë, Zoë is a big girl now, and she's smart. She needs to be told why she can't leave her phone at home and roam the marsh for hours. (Yes, there's a reason she shouldn't, folks, and you'll have to read the book to find out what it is.)

Salt Lane's mystery is a good one. It kept me guessing even though I should not have been surprised when the bad guy's identity was revealed. That's the best kind of mystery, though, isn't it-- when the bad guy is right out in plain sight? It's also a serious mystery, so the occasional flash of humor ("If it's Dolores Umbridge from the IPCC, tell her I'm busy.") is welcome.

A rock solid mystery that keeps readers guessing. A wonderful, atmospheric setting. Characters with layers that you have to peel back like onions. And Acknowledgements at the end that shed some interesting light on the author. Two excellent books in the series so far. I am really looking forward to book number three!