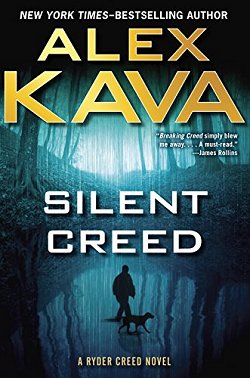 First Line:  Daniel Tate clenched his teeth and looked away just as the needle pierced a vein in his arm.

The only real reason why Ryder Creed and his best search and rescue dog, Bolo, are at the site of a landslide in North Carolina is that he owes his former superior officer a favor. Once he's there, Ryder's all business as he and Bolo search for survivors in the treacherous terrain.

As dangerous as the terrain is, what's now below ground is even more deadly: a top-secret government research facility, and the danger increases when bodies of employees at the facility are found shot to death. It doesn't take Creed and FBI agent Maggie O'Dell long to figure out that certain people are more concerned about recovering what's in that building and hiding their tracks than they are about finding survivors.

The first book in the Ryder Creed series, Breaking Creed, knocked my socks off, and this second installment is a pageturner, too-- even though readers who don't like cliffhangers are probably going to be furious. If you enjoy being immersed in the world of working dogs, Alex Kava's series is for you. A veteran of Afghanistan, Ryder Creed has a compound in the Florida Panhandle where he trains search and rescue dogs. What earns him a lot of Brownie points from me is the fact that the dogs he trains are rescues themselves. In Silent Creed, we get to see two of his best dogs at work, a Jack Russell Terrier named Grace and Bolo, part Rhodesian Ridgeback and extremely protective of Ryder.

The plot is based on fact and may get readers' blood boiling since it does concern how cavalier some of these secret research facilities are with their test subjects. Kava also brings home how dangerous it is to work search and rescue in a landslide area.

Besides the dogs and the storylines, I enjoy these books for the characters. It was good to see FBI agent Maggie O'Dell again because she works well with Ryder Creed, who's much more comfortable with dogs than he is with humans (although he has a tough time keeping his eyes off Maggie... and vice versa). I also hope to see a minor character named Daniel Tate again.

Even though I did find the ending rather jarring, I have the feeling that the character involved is going to figure prominently in some future book, and I look forward to the return engagement.