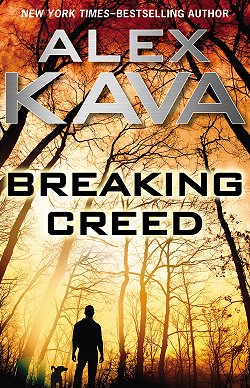 It was never Ryder Creed's intention to wind up in the spotlight, but that's exactly what's happened to him and the dogs he's trained for search and rescue, finding cadavers, and sniffing out drugs and bombs. Creed may not like it, but his partner says the publicity's good for their fledgling business.

One job has Creed and his Jack Russel Terrier named Grace searching a commercial fishing vessel off the coast of Florida. They discover that the Colombian cartel's latest shipment isn't drugs-- it's human.

Meanwhile, FBI agent Maggie O'Dell is following the trail of a brutal assassin. She's worked with Creed once before, so when she discovers a hit list with his name on it, she immediately goes into action. Hopefully, she isn't too late...

Last September, I happened to read an article about the top mystery series featuring working dogs, and Alex Kava's Ryder Creed series was on it. I've already sampled the others on the list and thought that it was high time I cracked open Breaking Creed. Boy howdy-- once I did, I didn't want to stop reading!

Breaking Creed has all the hallmarks of a thriller: the breakneck pace, lots of action, multiple locations,  and just the type of loathsome bad guys that made audiences boo! and hiss! in the old silent movie theaters. If that was all it had, it would be a good book, but it has a lot more.

I loved getting to know Creed and seeing the perfect set-up he has for his dogs-- the kennels, the fact that he trains rescue dogs, and that he's building facilities for a veterinarian. I pretended that I was part of the audience in one of those old silent movie theaters when I learned what many of his neighbors were doing, and then there was the pleasure of seeing Creed at work with his dogs. I'm the type of person who believes one of the best things in life is to find oneself in the middle of a romping pile of puppies, so you know I'm thrilled with the burgeoning subgenre of working dog mysteries.

There are some interesting secondary characters as well, like young Amanda and Jason, a vet who served in Afghanistan. Having Maggie O'Dell make an appearance from Kava's other series undoubtedly brought many Maggie fans over, but I'd never read a Maggie O'Dell mystery before. Guess what happened? Now I've added the Maggie O'Dell series to my Need-To-Read list.

What can I say? I'm the type of reader who is disciplined enough to put my book down when it's necessary, but I was enjoying Breaking Creed so much that I read until I finished the book at 5 AM. I'm certainly looking forward to reading the other books in the series, but in the meantime... anyone got a couple of toothpicks so I can prop my eyelids open?