Far From Home by Walter Tevis 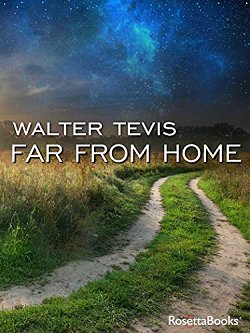 First Line (from "The Apotheosis of Myra"): Out beyond the French windows during the day's second sunset the grass began singing.

Three of Walter Tevis' six novels (The Hustler, The Color of Money, and The Man Who Fell to Earth) were adapted into major films, but he was also known for his short stories. I was in the mood for short stories and a bit of science fiction, so I picked up Far From Home.

This collection of thirteen stories reads fast. They are all well-written, and many of them gave me food for thought because of the subjects the author touched upon. Of the thirteen, five garnered most of my attention: "Rent Control," which shows the importance of a rent-controlled apartment in New York City; "The Apotheosis of Myra," about a husband who wants to get rid of his wife (but I enjoyed it for Tevis' vision of life on another planet); what a man tries to do to his past in "Sitting in Limbo"; to what lengths governments and engineers will go in order to be rid of a small obstruction in the path of a proposed monorail in "The Goldbrick"; and "The Ifth of Oofth," a cautionary tale about messing with the fifth dimension.

This is a solid short story collection that should please anyone who enjoys well-written science fiction.