The Taint of Midas by Anne Zouroudi 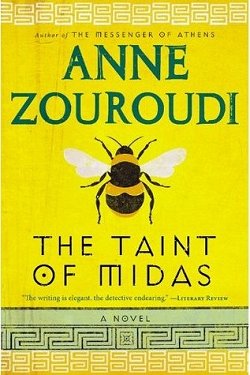 Gabrilis Kaloyeros is an old man with lots to do. He's a beekeeper on the beautiful Greek island of Arcadia. He grows watermelons and sells them in the market in the village, and the ruined Temple of Apollo has been under his care and protection for decades. But unscrupulous developers have taken over the island, and the prices for land have skyrocketed. Gabrilis is persuaded to sign away his interest, and hours later, he meets a violent, lonely death.

When detective Hermes Diaktoros finds his friend's battered body by the side of a dusty road, local police are quick to assume he's the prime suspect. Hermes vows to avenge his old friend and find the real murderer.

I've been going through my to-be-read shelves and finding the next books in series that I've started and unintentionally abandoned. This second book in Anne Zouroudi's Seven Deadly Sins series set in Greece certainly fits that criteria. The first book, The Messenger of Athens, introduced me to Hermes Diaktoros, who is far from being your usual detective. Someone has described him as "half Poirot, half deus ex machina," and it's true. He's a character to enjoy, from the way he investigates crimes to keeping those white shoes of his absolutely spotless to finding out the next thing he's going to pull out of his bag of tricks. Hermes also waxes philosophical at times: "He was considering the tangled threads of life; why was it sometimes so, he thought, that the righting of a wrong did not settle the scales, but created only crueler injustices?" This is something I've pondered in many of the mysteries I've read.

The mystery has two main threads: the primary one being who killed Gabrilis Kaloyeros, which is intertwined nicely with the story of two policemen, the veteran Gazis and the rookie Petridis. This cozy-with-a-twist not only gives readers an intriguing main character and a strong mystery to solve but it also gives a real feel for Greece-- the changes being made to lure the tourist dollar as well as how ancient myths can intersect with contemporary life.

This is definitely a series that I should not have neglected. I'm looking forward to following Hermes Diaktoros to his next case.