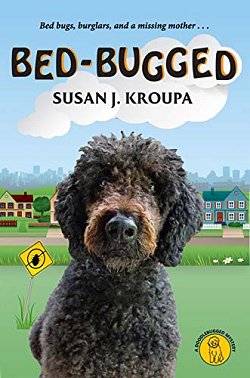 Humans aren't the only ones who have career changes; Doodle the labradoodle has had one, too. However, he's not worried in the slightest. Sniffing out bed bugs? A piece of cake. It doesn't take long for him to realize that the best part of his new job is Molly, the boss's ten-year-old daughter, who likes to slip Doodle treats whenever she's not taking photos with the camera that goes with her everywhere.

But when Molly enlists Doodle's help to solve a crime, his nose and her camera lead them straight into danger. And Doodle has to wonder-- is he going to be paid for this extra work?

I was in the mood for a mystery narrated by a dog, so I decided to give Bed-Bugged a try because I wanted to compare it to Spencer Quinn's Chet & Bernie series. Right off the bat, I learned that Doodle is a much different dog than Bernie. It must be his poodle blood that gives him a more intelligent voice. (Hey, I'm not kidding. The most intelligent breed of dog is the border collie. The second most intelligent? The standard poodle.)

Doodle has had some difficulties in his life. His first job didn't work out because, well, he'll be the first to tell you that "...smart and obedient do not always go hand in hand." With this new bed bug job, his primary concern is his wages (food), but that begins to change due to his growing relationship with Molly-- and watching that develop is just as much fun as trying to solve the mystery.

If you're in the mood for a light-hearted, well-plotted and -paced mystery told by a sharp-nosed narrator with an independent streak, Bed-Bugged is a good choice for adults even though it was originally aimed at middle-grade readers.

I wonder how Chet and Doodle would work as a team?