The Messenger of Athens by Anne Zouroudi 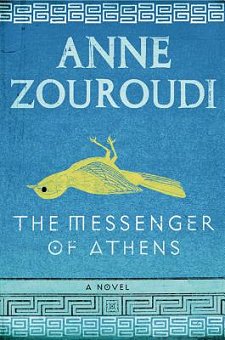 First Line: It was the spring of the year; the air was light and bright, the alpines were in bloom.

The Greek island of Thiminos is beautiful and remote, untouched and untroubled by the modern world. When the body of a young woman is found at the base of a cliff, the police-- guided more by the ancient rules of honor than by law-- are quick to rule it an accident and close the case. What they didn't count on was the unwelcome appearance of Hermes Diaktoros from Athens.

Diaktoros first stops at the police station where he announces that he intends to investigate the woman's death because he doesn't think it was an accident or a suicide. He believes it was murder, and he's going to prove it. Diaktoros's investigative methods are unorthodox. He seems to have information that no one else knows, and as he talks to the villagers, his message to them is plain: tell the truth or face the consequences. In no time at all, Diaktoros has uncovered a tale of passion, corruption, and murder that involves several of the residents of Thiminos.

As he travels the island to investigate, he raises as many suspicions as he does answers to his questions. Who has sent him to Thiminos? On whose authority is he here? How does he know of secrets that were buried decades ago?

Zouroudi has created a world and a main character that held me captive from first page to last. Her portrait of the tiny island is fully realized and evocative, and I love the way she accomplishes it-- not through passages describing the natural beauty of Thiminos, but through many small, telling details of the inhabitants' conversations and behaviors. It's a simple thing to search for photographs of the Greek islands; Zouroudi brings the life upon them into crisp focus, and the setting is all the more real for it.

Hermes Diaktoros is a fascinating character. His behavior and his personal habits are quirky, he has a good sense of humor, and he can be quite kind. But if someone is trying to hide the truth from him, he pulls no punches. He has no time for lies and evasions. Diaktoros is also the type of character who has his own secrets, and they are the type of secrets that can only be revealed over time and (hopefully) many books.

Zouroudi uses flashbacks to let the murdered woman tell her own story, and although she has made mistakes, she is a person deserving of sympathy and of justice. When Diaktoros unearths the truth about her death, I was stunned and a bit sickened; however, in one way or another, the wrongdoers of Thiminos are brought to justice.

I most definitely look forward to more investigations conducted by the mysterious Hermes Diaktoros.