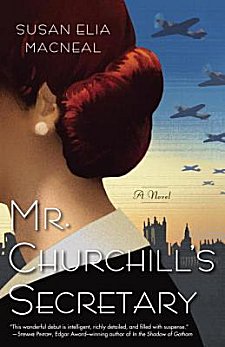 First Line: Half an hour before Diana Snyder died, she tidied up her desk in the typists' office of the Cabinet War Rooms.

Margaret Hope postpones her Ph.D. studies in advanced mathematics at M.I.T. in order to travel across the Atlantic to sell her deceased grandmother's London home. Winston Churchill has just been sworn in as Prime Minister, war rages across the Channel, and the threat of invasion looms larger each and every day. Margaret finds herself impressed by the spirit and attitude of the English in buckling down to do what must be done-- especially in the face of what Hitler represents to the world-- and she decides to stay to do her part.

Although she graduated at the top of her class and has all the prerequisites for a job with British Intelligence, the only job she can get is as a lowly typist in the offices of the Prime Minister. But even insignificant typists have access to the War Rooms, and Maggie's job exposes her to the machinations of those who are determined to change the course of history.

Once I started Mr. Churchill's Secretary, I could not put the book down. MacNeal created a wonderful cast of characters inhabiting Maggie's house and place of employment, and since there are people wanting to use her for their own ends, there's the added spice of reading and trying to identify the spies, wherever they may be.

Churchill plays a very small role in the book, and-- as is appropriate for someone with his talent and wit-- he provides one of the best lines in the book when meeting Margaret Hope for the first time: "Yes. We must have hope in this office." Maggie is an excellent character. She's naive-- not used to the spy business at all-- but she's quick-witted, and MacNeal keeps her true to character by not turning this sheltered college graduate into Lara Croft at the first sign of danger.

As the pieces are put into place, the reader is immersed in life in London during the Blitz, and by the time those pieces are all where they should be, the action takes off like a house afire. I haven't had this much enjoyment in reading a book for quite a while, and I'm most certainly looking forward to the next book in the series, Princess Elizabeth's Spy.