The Amok Runners by Colin Cotterill 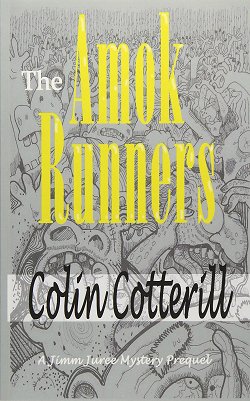 First Line: Sergeant Chat had ridden to the crime scene on his personal Honda Dream.

Jimm Juree and her brothers Arny and Sissy have found work as extras on an American movie complete with Hollywood stars that's being filmed in northern Thailand. If filming a movie isn't chaotic enough, Jimm's Burmese friend wants help with an ancient treasure hunt. But when Jimm stumbles upon a murder, her focus quickly changes to finding a killer.

I love both of Colin Cotterill's series which feature ex-journalist Jimm Juree and Dr. Siri Paiboun. He has a wonderful sense of humor, and I've learned so much about the people and culture of Thailand and Laos. Unfortunately, The Amok Runners is a bit of a hot mess. Let me explain after a short digression.

When I was growing up "running amok" was a frequently used phrase. (It means to behave in a frenzied, out-of-control, or unrestrained manner.) I liked the sound of it and always said that I'd like to run amok at least once in my life, so when I saw the title of this book, it made me smile. Jimm and her brothers Arny and Sissy get to run amok as extras in the crowd scenes being filmed in the movie. Since the crowd scenes involve attacking armies and innocent bystanders, they get to do a lot of uncontrolled screaming and running. I enjoyed those "insider" scenes during filming. I also liked the two mysteries of the treasure hunt and the murders. I love how quick Jimm's mind is at putting together disparate clues. Now for the hot mess.

The synopsis on the back of the book says The Amok Runners is a prequel to the previous three Jimm Juree mysteries, all of which I've read and enjoyed. However, Prologue 2-- which is Jimm's letter to Clint Eastwood, a running joke in the series-- mentions events that happen much later in the series. This is such a glaring oversight that I had to go back and reread the first pages of the book to make sure my brain hadn't slipped a cog. It hadn't. I'm still wondering how this could come through the entire writing/editing/publishing process without being caught.

It put me off-balance for the entire book, which is a shame because there is a lot to like in The Amok Runners. All you Jimm Juree fans beware and be prepared. For all of you readers who are new to Jimm, chances are you won't notice a thing. Just sit back and read. From the chill-down-the-spine Prologue 1 to the end, you'll get to watch the most eccentric trio of siblings in crime fiction solve not one but two mysteries.