Death in the Rainy Season by Anna Jaquiery 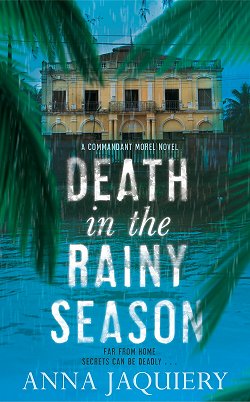 First Line: The moment he turned down the alley, the dog started barking.

Commandant Serge Morel was enjoying his vacation in Cambodia until the head of a humanitarian organization is brutally murdered and he's called to Phnom Penh to work with the Cambodian police to solve the crime. The victim is French and well-connected, so it does Morel the French policeman no good to protest.

He finds the investigation hampered by the murder having occurred in a country with few forensic resources and his being teamed with a local police detective who clearly doesn't want to be there. But what hinders the investigation most of all is the dead man himself. What was he doing in a hotel under an assumed name? Do land grabs have anything to do with his death? Who broke into his home on the night of the murder? As the rain continues to pour down from the sky, Morel has to slog his way to the answers that will solve this crime.

I had some problems when I read the first Commandant Morel mystery, The Lying Down Room, but I'm happy to say that this second book didn't have them. Well, her, to be precise. I strongly disliked the character of Lila Markov, so I was thrilled that she stayed behind in Paris. With Miss High and Mighty out of the way, I could settle down to enjoy the book.

I liked the depiction of Phnom Penh during its monsoon season, and I learned a bit about the Khmer Rouge as I tried to solve the mystery. Morel, in the homeland of his deceased mother, is much more relaxed here and doesn't resort to his hobby of origami nearly as often as he did in the first book.

In Death in the Rainy Season, the whodunit is rather easy to solve. At least it was for me. It's the eternal "Why?" that kept my little grey cells confused. All in all, the setting and the mystery are strong reasons to read this second Morel book. I wonder if there will be a third?