The Lying Down Room by Anna Jaquiery 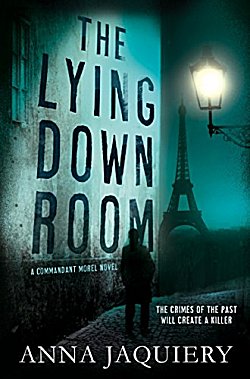 First Line: For a long time, he watches the people in the queue.

Commandant Serge Morel lives with his father in their large Paris apartment. His father, always a force in his life, is slowly succumbing to dementia, which is a concern for the busy policeman-- especially considering the puzzling new case he and his team have been presented with.

It's August. It's swelteringly hot, and Morel is called to the crime scene of an elderly woman who's been murdered to the soundtrack of Fauré's Requiem and then grotesquely displayed. As the investigation progresses, the suspects narrow down to a middle-aged man and a mute teenage boy who have been delivering religious pamphlets to older women in various neighborhoods.

As more elderly women are targeted, Morel finds his investigation moving away from France back to Soviet Russia, and locating those two men becomes even more critical.

I came to The Lying Down Room by a circuitous route. The second book in the series really caught my eye, primarily because it takes place in Cambodia, but I decided to read the first book to get a better feel for the character of Commandant Morel. I wish I'd gone ahead and read that second book first.

This mystery is well-plotted and has a good smooth pace that moves the story right along. Jaquiery gives readers a strong portrait of Paris in August-- particularly of the murderous traffic and of Président Sarkozy's policies. We're told that "over the past six months Morel's team had closed more cases than any other team at the Criminal Brigade," and we're introduced to them, but the introductions are rather hit or miss. Morel feels that one member belongs elsewhere, and the one that readers see most is Lila Markov of the IQ of 174. She spends the entire book in a perpetual bad mood and just made me want to tell her to get over herself.

Morel has a lot on his plate because budget cuts mean fewer police officers to do more work. His father is in the beginning stages of dementia, and when Morel needs to decompress, he either makes a complicated origami bird or visits his married mistress. All the bones of The Lying Down Room are good, but I didn't particularly enjoy the book because I felt as though I were being kept at a distance; I never felt fully engaged with the story or with the characters. Now I need to decide if I want to follow Morel to Cambodia. If I do, it won't be in the immediate future.