In the Clearing by Robert Dugoni 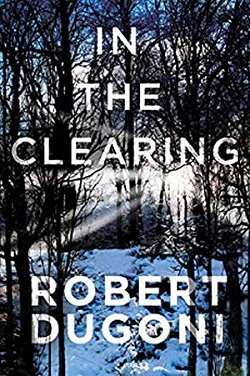 First Line: Buzz Almond informed dispatch he was rolling, punched the accelerator, and smiled at the roar of the 245-horsepower V-8 engine, the g-forces nudging him back against his seat.

Jenny, a former police academy classmate, knows Tracy Crosswhite's soft spot and her skill set. Having lost her own sister to murder at a young age, Tracy loves tackling unsolved crimes. She knows firsthand how important justice and closure are to the victims' families and friends. When Jenny's father, the police chief in a small town in southern Washington, died, Jenny found the case that wouldn't let her father go: the suspicious suicide of a Native American high school girl forty years ago.

Tracy agrees to take a look at the case and begins combing the small town's memory. It's not long before she starts uncovering inconsistencies and secrets that were believed to be well-buried. Is Tracy going to be able to uphold the promise she's made to the dead girl's family? It's anyone's guess because she could very well be the next victim.

In the Clearing is a two-investigation, two-timeline mystery that held my interest from beginning to end. One investigation involves the death of a man in Seattle. Most of the police officers believe that the man's wife killed him and that her father, a high-powered, expensive lawyer, is going to get her off scotfree. The second investigation involves the forty-year-old cold case in southern Washington, and it takes center stage.

Throughout Tracy's investigation of the cold case, it is shown how difficult it is to prosecute cases in which so much time has passed. Flashbacks to 1976 give readers insight into the characters. And as far as difficulties go, Tracy shows once again how hard it is for someone as dedicated as she is to have any sort of personal life.

For me, the character of Tracy Crosswhite makes this series. I really enjoy watching her work. Her dedication to both the person lost and to those left behind. Her unwillingness to stop until justice is done. The special insight she has into the mindset of victims' families because of her own history. No one can endure the disappearance of a sibling and not knowing what happened for almost twenty years without being changed. Since this is a road Tracy has been down, she's especially suited to talking to the bereaved and often getting information from them that no one else has.

Yes, In the Clearing has Tracy saving the day once again. It's a strong performance even though I found the solution to both cold case and new rather easy to deduce. I'm looking forward to the next book in this series.