Game of Mirrors by Andrea Camilleri 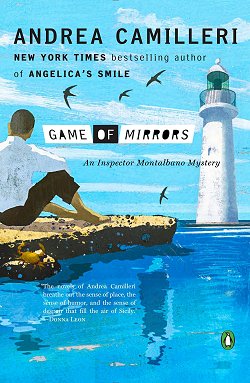 First Line: He'd already been sitting for at least two hours, naked as the day God created him, in a chair that looked dangerously like an electric chair, wrists and ankles bound in iron bands to which were attached a great many wires that led into a metal cabinet all decorated on the outside with quadrants, pressure gauges, ampere meters, barometers, and little green, red, and blue lights blinking on and off without end.

When bombs explode outside two empty warehouses, Inspector Salvo Montalbano and his colleagues are stumped. What kind of message is the bomber trying to send? Since one of the warehouses is connected to a drug dealer, maybe that's the connection.

In the meantime, Montalbano's very sexy, very alluring, next-door neighbor Liliana Lombardo is trying her best to seduce the inspector-- and her best is enough to incinerate most men's restraint. Between bombs, drug dealers, sexy neighbors, and pesky reporters, Montalbano begins to feel that he is being manipulated, and it's a feeling he does not like-- especially when he becomes the prime suspect in a brutal murder.

After reading nineteen Montalbano mysteries, it's almost impossible to write a review without repeating myself. Another reviewer said, "You either love Andrea Camilleri or you haven't read him yet," and I'd like to think that's pretty much true. (Although I'm realistic enough to know that it's not.) For me, Andrea Camilleri's blend of intriguing mysteries, humor, and characterizations are wonderful, and from the second I pick up a Montalbano mystery, I know I'm going to enjoy it. Furthermore, Stephen Sartarelli cannot be praised highly enough for his brilliant translations of the books.

In Game of Mirrors, it's a pleasure to watch Montalbano's mind work because the mystery is a game of mirrors, filled with twists, turns, and almost everything seeming to be something it's not. Through it all, Camilleri makes me laugh. If I had to name one favorite humorous character in all the series that I read, Catarella would be my choice. You could almost be forgiven for believing that this man is a total buffoon... almost... except that it would mean that you haven't been paying close attention to the stories. Camilleri lets readers know that Catarella has his strong points, too. Besides, the irascible Montalbano wouldn't keep a complete moron on his staff.

If you haven't read an Inspector Montalbano mystery, you really should do something about that. Yes, the series is a long one, but it's written in such a way that you can jump in anywhere. Give one a try. You can thank me later.