The Night Fire by Michael Connelly 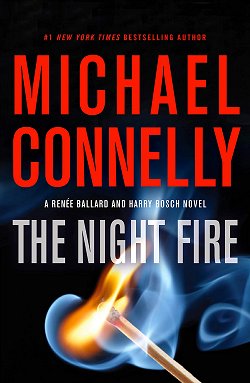 First Line: Bosch arrived late and had to park on a cemetery lane far from the gravesite.

Jack Thompson was Harry's mentor when Harry was a rookie homicide detective. When Jack dies, his widow gives Harry a murder book, one that Thompson took with him when he left the LAPD twenty years before.

The murder book concerns the unsolved killing of a troubled young man, and Harry takes it to Detective Renée Ballard for her help. What was it about this case that lit Thompson's fire all those years ago? While working her own cases on the midnight shift, Ballard begins making inquiries and finds that aspects of the initial investigation just don't add up.

Bosch and Ballard are forming a tight bond as they become a formidable investigative team. It doesn't take them long before they are asking themselves the question: Did Thompson steal the murder book to work the case in retirement, or to make sure it never got solved?

One of the things that Harry Bosch's mentor, Jack Thompson, told him was, "Take every case personally and you get angry. It builds a fire. It gives you the edge you need to go the distance every time out." It's something that Harry has done time and time again, and readers are seeing that Renée Ballard is cut from the same cloth.

The Night Fire is a mystery that kept me guessing, and I loved how all the various subplots were woven together. It takes skill to tell so many stories in such a way that isn't confusing, but long-time fans of Michael Connelly know that he's a master of the craft.

One of the underlying themes of The Night Fire is the fact that you can always learn things about the people you thought you knew well. No one wears all their experiences, all their emotions, out in plain sight for everyone to see. During the course of their investigation, both Bosch and Ballard discover that they have a lot of learning to do about their fellow police officers.

Harry Bosch has had a very special place in my heart since I first met him in the first book in the series, The Black Echo-- twenty-three books ago. I've tried to adopt Harry's mantra ("Everybody counts or nobody counts.") in my daily life. If you've never met him and don't feel like dealing with all the books in such a long-running series, I urge you to start with The Late Show. You'll be introduced to another wonderful character, Renée Ballard, who's really a young female version of Harry. And when they start working together, it's a match made in readers' heaven. Please don't miss it!