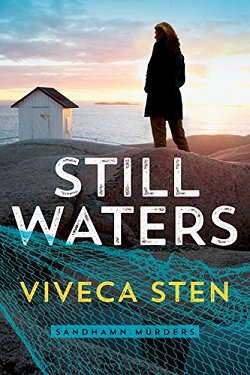 First Line: Everything was completely still and peaceful as only winter can be when the archipelago belongs to those who live there, and the raucous summer visitors have not yet taken over the islands.

Police detective Thomas Andreasson is first on the scene when a body tangled in a fishing net washes up on the shore of Sandhamn, one of Sweden's idyllic vacation islands. The body is identified, and everyone believes the death to be an accident until another corpse is found at a bed-and-breakfast, and this second corpse happens to be the cousin of the first victim.

When an old friend, lawyer Nora Linde, helps Thomas with needed information on the investigation, he finds himself spending more time with her and her family. Nora and Thomas both have issues in their lives that need to be straightened out.

I loved the setting of Still Waters and the little tidbits of information I gleaned from the story. For instance, a sweltering summer day in Sweden is merely a winter's day here in southern Arizona. Another piece of trivia was learning what the Swedes call geraniums and impatiens. Perhaps it's because I do have a trivial mind, but I enjoy learning about things like this. As in other Swedish crime fiction that I've read, the author tends to be very precise about the streets traveled and the towns passed through as the police conduct their investigation. At this point, I've gotten used to it.

Viveca Sten's precision includes her characterizations. The main characters are described, warts and all. Nora's husband, Henrik, is a "wonderful" combination of spoiled brat and doctor-with-a-God-complex, so it's easy to see there's going to be some tension there. The characterization I found most rewarding was that of Thomas. He's a good police officer, hardworking, and very caring and understanding of others, but his reaction to his infant daughter's death definitely shows that he's not perfect.

Sten has written an excellent, multi-layered mystery in a vivid setting; however, I felt the entire book suffered from descriptive diarrhea. I think this was done in order to show the actual progression of a murder investigation. These things do not get solved within the hour timeframe of a television drama, as most people are accustomed to. But there are better ways of doing this than describing the exterior and interior of every building the characters enter (believe me, I don't think they left any building unentered), the clothing worn, or by each character having large periods of introspection.

Still Waters has a wonderful setting, a very good mystery, and some interesting characters, but all the added extras were exhausting. I doubt I will continue with the series.