The Ghost and Mrs. Muir by R. A. Dick 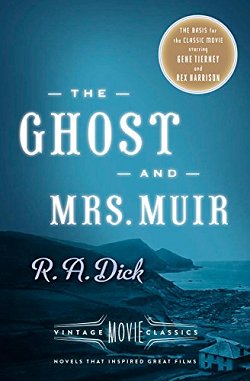 After her husband's death, Lucy Muir moves her two young children to Gull Cottage at the edge of a quaint seaside village on the southern coast of England. The house suits her right down to the ground, but she soon finds out that the reason why it's so cheap is that it's haunted by the ghost of its builder, Captain Daniel Gregg.

For some reason, the brusque old sea captain likes Lucy and doesn't chase her off as he has everyone else, and as the years pass, a special relationship grows between them. Lucy deals with providing for growing children, trying to publish Gregg's memoirs, and romance from a surprising source, and no matter what happens, she can rely on the ghost of Daniel Gregg.

Once more, I find myself reading a book upon which a favorite movie has been based. Even though I've never been a fan of either Gene Tierney or Rex Harrison, the 1947 screen adaptation of The Ghost and Mrs. Muir has always been a favorite. Since I don't care for the actors, I think it's safe to say that it's all due to the story.

The movie actually follows along rather closely to the book, only changing the chronology from time to time and having Mrs. Muir have just one child-- an excision I could understand completely.

At the very beginning of the book, we are told that Lucy Muir is a little woman, but it takes no time at all to see that the only people who call her little are those who go through life with blinders on-- and those who insist on keeping her "in her place." R.A. Dick's novel is so much more than a ghost story; it's about a woman who insists on living the life that she wants without other people telling her what to do.

My experiences in reading books that have been the source of favorite movies have been a bit hit-or-miss, but I'm happy to say that reading The Ghost and Mrs. Muir is a success. Both book and film are well done. Both stand the test of time, and both can bring a tear to the eye.