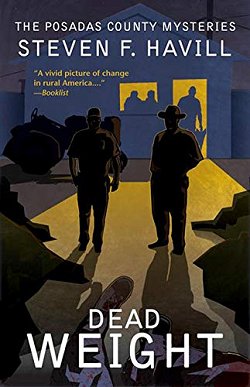 First Lines: The air conditioning in car 310 worked so well that my knees ached from the arctic blast out of the vents. The rest of me simmered.

Acting Sheriff Bill Gastner is a well-seasoned sixty-nine and working through the end of the previous sheriff's term. He knows every inch of Posadas County, and he knows the people who live there. That's why, when a backhoe crushes a man to death, he has a pretty good idea that there's more to this "accident" than meets the eye.

While Gastner is investigating this case, he begins receiving anonymous letters accusing one of his deputies of extortion. This one Gastner takes personally and he's determined to get at the truth. Could this have anything to do with this being an election year?

When a second dead body turns up, it makes the insomniac sheriff make a promise to himself: When he retires, it's not going to be by way of a well-aimed bullet.

I love this series for its southern New Mexico setting, its well-crafted mysteries, and its ensemble cast. (Character-driven readers, take note!) There's something about mystery series involving small-town sheriffs in the western United States that seems to highlight how these people become a family, and Havill certainly knows how to use this to strengthen his story.

In Dead Weight, there's also one-book wonder Carla Champlin, the landlady from hell. Whenever she makes an appearance, I was equal parts amused and appalled-- and I did like how her storyline ended.

If there was an off note in this book, it was the fact that Havill spent a bit too long on trying to explain how someone could kill himself with a backhoe. I don't mind some technical stuff in order to solve a mystery, but when my eyes started to roll, I knew that part of the story had gone a bit overboard.

Even if I do know more about backhoe-as-murder-weapon than I want, I still enjoyed this book. Any visit with Bill Gastner and his law enforcement family is to be looked forward to and savored. And I do!