Murder at the Mushroom Festival by Janet Finsilver 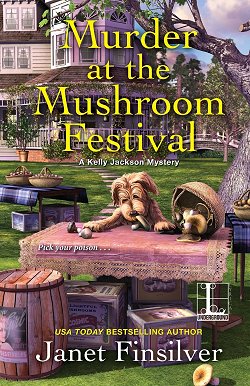 First Line: Mushrooms of all shapes, sizes, and colors covered the top of the large table in the work area of Redwood Cove Bed-and-Breakfast.

It's time for the annual Mushroom Festival in Redwood Cove, California, and there's a local newspaper reporter who is a gold medal winning feather ruffler. When the man is found shot to death on sacred Native American land, B&B manager Kelly Jackson must go to work with the Silver Sentinels senior sleuthing group to find the killer.

I dearly love crime fiction. I love the insights into the human mind. I love trying to solve each case. I love bringing justice to the world even if it is merely fictional. But there are times when the darkness of crime fiction can be a bit too much. It is at these times that I like to turn to mysteries that are kinder and gentler. Justice is still served, yet the vast majority of the cast are good people who contribute to their communities, are good to others, and who know all about doing what's right instead of what's convenient. No one's a diva, they're just plain good folks. "Nice" if you will, even though "nice" seems to get short shrift in this world.

Janet Finsilver's Kelly Jackson mystery series is one of the kindler, gentler series I turn to when I need to step out of the darkness. Finsilver always provides a solid mystery for her cast of characters to solve. A bonus is that she also provides working dogs in rather unusual occupations. For example, one book had a dog that sniffed out bedbugs and other insect infestations. Murder at the Mushroom Festival has a dog that sniffs out mushrooms.

There are a couple of men in this book that I really enjoyed. Clarence and Thomas are on a mission to challenge each other to learn new things. One year, it was knitting; this year it's mushrooms and cooking. More folks should be like them. And it's not just the characters and the mystery readers will like. I always learn something about the area in which these books are set-- California's Central Coast with its redwoods. The information Finsilver wove into the story about redwood sinker logs was fascinating even though it may not sound like it.

If you love mysteries but need to step out into the light from time to time, I can certainly recommend Janet Finsilver's Kelly Jackson series. They do the heart good.