Save Me from Dangerous Men by S.A. Lelchuk 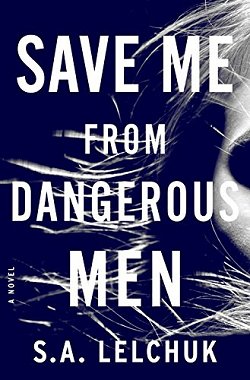 First Line: The bar was over in West Oakland.

Oakland, California's Nikki Griffin wears many hats. She owns The Brimstone Magpie Bookstore, and she's also a private investigator. But there's another hat she wears. A more clandestine one. She tracks down dangerous men who have hurt the women they claim to love. Once found, Nikki teaches these men what it feels like to be hurt and helpless so that their victims are safe from them forever.

When Nikki is hired by a tech company to follow an employee who's allegedly selling secrets, she has to break cover and intervene when the woman's life is threatened. Karen tells Nikki that there are dangerous men after her and that she'll tell Nikki what's really going on. But then something goes wrong. Now Nikki is no longer just solving a case-- she's fighting to stay alive.

When I read a synopsis of Save Me from Dangerous Men that said Nikki Griffin likes to teach abusive men a lesson, I was reminded of Sophie Littlefield's award-winning Stella Hardesty series about a 50-year-old domestic violence survivor who helps other abused women. That synopsis also compared Nikki to Lisbeth Salander, Jack Reacher, and Jessica Jones. Once I started reading the book, I felt those comparisons were a bit tenuous, but I saw another one. Anyone out there watched the film The Blind Side? I think Nikki Griffin scored just as high in "protective instincts" as Michael Oher. She simply cannot stand the thought of anyone getting hurt on her watch, and she will go to extraordinary lengths to prevent it.

From all these comparisons, you might think that Save Me from Dangerous Men is a copycat, riding on the coattails of books that have gone before. If you get right down to it, most books are. The ideas may be the same, but it's what authors do with those ideas that make the difference, and S.A. Lelchuk has created a strong, interesting main character. (Besides, most comparisons in the world of publishing are attempts to buttonhole a book in order to get readers to buy, buy, buy.)

I would have been happy with Nikki just because she has a fabulous used bookstore, The Brimstone Magpie, the name of which is a reference to Charles Dickens' Bleak House. Then there's the ZEBRAS reading group whose stated purpose is the "Solving of Crimes, Reading of Mysteries, and Nitpicking of Everything." (And may I just say here that I wish there'd been a bit more of the ZEBRAS in the book.) But there's more to Nikki than her bookstore. Her voice drew me right into the story and kept me in. For the first time, she's met a special fellow and actually wants the relationship to work. Plus... she doesn't own a cell phone, and she has some ninja skills that will make you sit up and take notice.

The story is a strong one, and I loved the twist at the end. What I did tire of from time to time is Nikki's propensity to get into violent situations. I think it must be the stage of life I'm in because I would really love to have characters get out of situations by using their brains instead of violence. However-- and it's a big however-- the violent situations in this book are not gratuitous, they are not bloody or gory, many of them are not carried out to their conclusions, and all of them serve to illustrate Nikki's character.

Save Me from Dangerous Men has a fast-paced story and a kickass main character. I look forward to reading the next Nikki Griffin mystery.