Stick Together by Sophie Hénaff 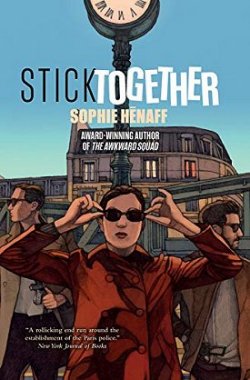 First Line: Jacques Maire walked along the canal which ran through the centre of L'Isle-sur-la-Sorgue.

After bringing a dirty cop to justice in The Awkward Squad, the entire Paris police force considers Commissaire Anne Capestan's squad a bunch of traitors. This certainly isn't going to help them with their latest investigation into the death of Capestan's ex-father-in-law, a former police officer with no shortage of enemies. Even though they're referred to as "the official dregs squad," these misfits seem to be putting clues together faster than their fellow officers in other divisions and have already found two additional murders that tie into theirs.

With everyone expecting them to fall flat on their faces, it's up to Capestan's squad to prove them all wrong, and readers are going to enjoy the journey as long as they don't mind a mystery that focuses more on the characters than it does the investigation-- at least from time to time. It's fun to piece together the clues in Stick Together, even though the identity of one of the bad guys is rather transparent.

However much I do enjoy solving the mysteries in the Awkward Squad series, I have to admit that the characters are what I really focus on. It's been proven time and again that, if you treat someone like a loser, they are going to behave like a loser. That's what's happened to the members of the Awkward Squad-- until they're transferred to their new division. Anne Capestan is the perfect boss for this crew. She accepts them as they are and still expects them to do their best everyday. They get no respect from any other police officer in the city of Paris except for the head of the Police Judiciare who secretly helps Anne when he can. When Anne is given a new transfer, he tells her, "I think deep down he's damaged. Fix him if you can, please, commissaire."

It's to Anne's credit that she does seem to be able to fix damaged police officers, and with an officer who's fresh out of the psych ward and another whose last assignment had been as an informer, she needs every ounce of her skill. Yes, Stick Together-- as well as the first book in the series-- can be read as mysteries, but if you're the type of crime fiction reader who likes a bit of humor and a character-driven story, author Sophie Hénaff should really be your cup of tea. The only part of the book that felt a bit over the top to me was a trip to an island at the end, but it does show the group bonding.

I've always loved stories about how a bunch of misfits and losers come together, learn to work together, and begin to take pride in themselves again. If you think about it, Hénaff's series about an improbable group of police officers follows Harry Bosch's Rule: Everybody Counts, or Nobody Counts.