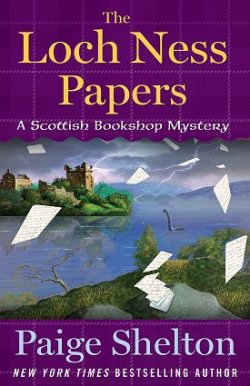 First Line: The rain fell in sheets and the clouds grumbled angrily.

In less than two weeks, Delaney Nichols will be getting married. Her parents and her brother are flying in early from Kansas for a bit of sightseeing in and around Edinburgh as well as some much-needed quality time together. What Delaney does not need are complications-- and that's exactly what she gets. When the pastor who was meant to perform the wedding ceremony dies, she searches for another, and that's when she stumbles across Norval Fraser, an elderly man who is absolutely obsessed with the Loch Ness monster. She befriends Norval and goes back to her to-do list.

But the complications aren't through with her. A Texan comes into The Cracked Spine where Delaney works and hands over an extremely valuable rare book, and then Norval is accused of murder. With the police satisfied that Norval is a nutter whose obsession led to murder, Delaney sets out to learn the truth. If there's one thing this transplanted American takes seriously, it's loyalty to friends, no matter how new they are.

It's always a pleasure to visit with Delaney Nichols in Edinburgh and to wander the aisles (and the storeroom) of The Cracked Spine Bookshop, and this certainly holds true for The Loch Ness Papers. There's a lot going on in this book: wedding preparations, trips to Loch Ness, rare books, visiting family, and-- of course-- murder. In Shelton's capable hands, the plot does not seem overburdened, although I would be less than honest if I didn't admit that I had a problem or two with the book. At least I can say that I think the problem lies more with the reader (me) than the book. Let me explain.

There's a glitch in the driving time to Loch Ness that had me scratching my head for a second, and I thought the identity of the killer was very easy to deduce. But that's technical stuff and not what bothered this reader the most.

The pastor scheduled to conduct the wedding ceremony dies. Delaney asks for suggestions for a replacement from her friends and doesn't break a sweat. Another decidedly major part of the wedding goes horribly awry, and Delaney sheds a tear or two and goes back to helping Norval, the elderly man accused of murder. Her family arrives, horribly jetlagged, and she bundles them in a car to take them to Loch Ness because she has to interview someone about Norval. Once her family has finally recuperated from their flight, Delaney keeps on investigating and lets her friends show them around Edinburgh. Huh?

Quite frankly, if that were me, Norval could find another savior. I would be working harder on the bits of my wedding that have gone wrong (and probably ripping out a handful or two of my hair along the way). And I would definitely be taking charge of showing my family around as much of Scotland as I could. I could not understand Delaney's laissez-faire attitude. Then two things dawned on me. One, this entire series has a fairy tale quality to it. Delaney walks into her dream job with perfect co-workers. She falls into the perfect place to live-- and it's complete with a built-in chauffeur. She finds her dream man. Good things happen to good people, and who doesn't like to read about that once in a while? The second thing that occurred to me was that I've never had the kind of support group that Delaney has. Between family and friends whom she trusts completely, she can hand over those wedding disasters and know that they are going to be taken care of. Makes me a bit jealous, that does, but personal relationships, loyalty, and trust certainly add to the heart-warming feeling of this entire series.

Now all I want to know is...what's Delaney's next adventure going to be?