The Awkward Squad by Sophie Hénaff 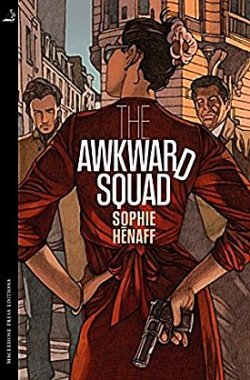 First Line: Anne Capestan was standing at her kitchen window waiting for dawn to arrive.

Having been suspended for firing "one bullet too many," Commissaire Anne Capestan is expecting the worst when summoned to headquarters in Paris. Instead, she's surprised to learn that she's to head up a new police squad focusing on cold cases. Capestan is relieved to still have a job, but she is not overjoyed by her new role-- especially when she meets her new team: a group of misfits, troublemakers, and problem cases, none of whom are fit for purpose and none of whom can be fired.

But all may not be lost. When they begin investigating some of the cold cases, they all discover that there are real mysteries to be solved... and they may be just the squad to get the job done.

Author Sophie Hénaff starts with a premise that a lot of businesses probably wish they could do: round up all the losers they can't fire and put them someplace where they can be overlooked and forgotten. What I love is the fact that the author then turns this on its head-- what if these police officers aren't the wastes of space everyone believes them to be?

French police hierarchy has rounded up this group of embarrassments, put them in a rundown building with little or no equipment or supplies and tells Commissaire Anne Capestan point-blank, "We're paying you to play dominoes or do some knitting." That was their second mistake. Their first was to put Anne Capestan in charge of this motley crew that includes Bad Luck Torrez, Merlot the drunk, Évrard the gambler, and others. Capestan has absolutely no intention of going quietly into that good night, but she needs the help of the few officers who bothered to show up for duty.

The mysteries this group solve are good ones and make for enjoyable reading, but the real treat of The Awkward Squad is watching this group of misfits come together to form a team, find resources that headquarters won't give them, and solve crimes that no one expected them to solve. The sly humor that appears from time to time is icing on the cake.

There's always been a part of me that roots for the underdog, and now that I've met this unlikely group of crime solvers, I can't wait to cheer them on in the next book.