Depth of Winter by Craig Johnson 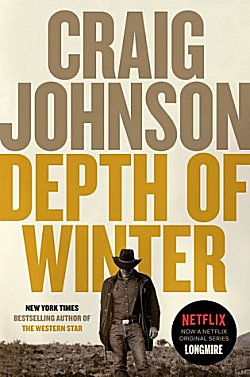 First Line: I turned my water glass in the slick circle of condensation on the smooth red lacquer of the table between us and studied the man across from me.

At the end of The Western Star, we learned that Sheriff Walt Longmire's daughter, Cady, had been kidnapped by the head of one of the most vicious drug cartels in Mexico. Now in Depth of Winter, he must head south to save her before she's auctioned off to his worst enemies. He's traveling light and traveling fast. The American government is of limited help and the Mexican one even less, so it's one man against an army in the brutal 110° heat of the Mexican desert.

If you're a Longmire fan who's not happy unless Walt is firmly ensconced amongst his friends and they all have an equal part in the action, you won't like with Depth of Winter. This is a one-man show, and characters like Henry and Vic play very limited roles (although I did love Henry's). Me? I'm the type of Longmire fan who'd follow Walt willingly into any one of my own circles of hell (which include rooms of long-haired cats and/or screaming babies), let alone his. I trust Walt to get me out alive and show me a good time while he's doing it.

One of the reasons why I was looking forward to this book was the fact that I'm used to Walt chasing bad guys in the depth of winter on his home turf, with howling winds, blizzard conditions, and snow up to his eyebrows. In Depth of Winter, he's facing an entirely different beast: winter in the desert of northern Mexico, and I wanted to see how he'd deal with blinding sunlight, blazing heat, and not a drop of water around. Walt is a Man On A Mission, so he deals with it as only he can.

Since he's got Henry and Vic handling things for him elsewhere, he manages to scrape together a motley crew to help him down in Mexico, and the rescue of Cady is one wild ride that only someone like Craig Johnson can put together. Walt is a man who goes out of his way not to kill people, but folks down in Mexico keep telling him, "Kindness to a killer builds coffins." After a grueling trek through the desert and coming face to face with "that kernel of madness" he keeps buried deep inside, the finale of Depth of Winter is explosive-- and satisfying.

Once again, I find myself in a familiar place-- all caught up with the series and waiting for a new adventure with Walt. Some authors just don't write fast enough, you know?