The Prisoner in the Castle by Susan Elia MacNeal 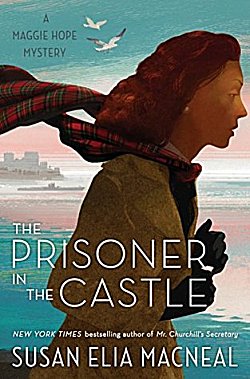 First Line: Always remember when you're on the run, instinct will take over-- and if you're not careful, you'll become nothing more than an animal.

As World War II rages on, Maggie Hope joins a group of agents imprisoned in Killoch Castle on a remote island off the northwest coast of Scotland. They all know too much about something-- especially Maggie. She knows what the British government is willing to do to keep its secrets. She knows the real location of the planned D-Day invasion. And she knows the double-crossers who are sending agents to their deaths.

But shortly after Camilla Oddell, a new prisoner, arrives, something happens that takes Maggie out of her boredom and frustration. One by one, people in the castle begin to die, and Maggie realizes that her priorities have changed. Convincing others of her ability to keep secrets no longer matters. What matters is her ability to survive.

If you have a suspicious nature like mine, it won't be all that difficult to narrow down the field of suspects in MacNeal's homage to Agatha Christie's And Then There Were None, but it's still a fun read, and anyway, the best mysteries are about more than merely deducing the identity of a killer. The Prisoner in the Castle satisfies on so many levels, such as... The way MacNeal weaves historical facts into her narrative. The way she breathes atmosphere into her Hebridean setting. The way the action sequences in her book have your eyes glued to the page. And I could go on. In fact, I think I will.

The main strength of this book (and the entire series) is the character of Maggie Hope herself. Longtime fans have seen her grow from a clerical position at Bletchley Park to Winston Churchill's secretary to secret agent, and each step is believable. Maggie Hope is extremely intelligent and extremely dedicated. She can think on her feet, and she doesn't know when to give up. The high-powered ending of The Prisoner in the Castle shows how tough and resourceful Maggie is. Femininity is far from being a disadvantage, as many women actually proved during World War II. And-- lucky for her-- she's gathered friends around her who care deeply for her and who also refuse to take no for an answer. In war as in life, we all need friends.

If you're new to the series and simply cannot face going back to the beginning (Mr. Churchill's Secretary), you can begin here, but Maggie is such a wonderful character, I do hope you will reconsider. Susan Elia MacNeal's Maggie Hope series is one of my favorite historical mystery treats. Neither woman disappoints.