The Shattered Tree by Charles Todd 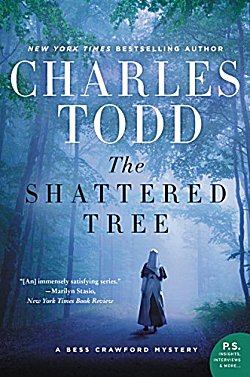 First Line: He crawled as far as the shattered tree and lay there, faint from the effort.


Rumors are flying that the war is about to end, but the Germans are putting up a vicious, last-ditch fight. At an aid station on the front lines, stretcher bearers bring nurse Bess Crawford an exhausted officer, shivering from cold and blood loss. She stabilizes him and treats his injuries before he's sent to a hospital behind the lines. This particular officer stands out. He's not British, he's French and far away from his own lines-- and in a moment of stress, he shouts at Bess in German.

Although his knowledge of German is explained as his being a native of Alsace-Lorraine, a territory hotly contested by France and Germany, Bess can't get him out of her mind. Too many things just don't add up. When in Paris, she learns that this officer has disappeared, and Bess-- soldier's daughter and nurse that she is-- is determined to find him.

This eighth book in Charles Todd's Bess Crawford series puts her in some new situations, which aids her in her investigation into the mysterious German-speaking French officer. We also learn that wartime shortages affected everyone in every walk of life in France and England, and some of the shortages can be surprising. The disputed Alsace-Lorraine area plays a large role in the plot, with its old murders, old border disputes, new wars, new demands, and new spies.

For me, The Shattered Tree is not one of the best books in this series that I enjoy so much, mainly because the pace is really bogged down by an extremely convoluted plot. But as the war draws closer and closer to an end, I'm looking forward to learning what's in store for my favorite battlefield nurse.