Faces of the Gone by Brad Parks 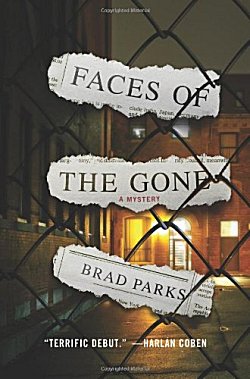 First Line: With all the vacant lots in Newark, New Jersey-- and there were thousands of them-- the Director could afford to be picky.

Investigative reporter Carter Ross knows Newark, New Jersey, so when he hears that the police are saying four bodies shot execution-style and left in a vacant lot are revenge for a bar stickup, he knows the story doesn't make sense. It takes a bit of digging, but Carter learns that the four victims do share something in common, and once he knows that, the deeper he searches, the closer he gets to one very serious killer.

I came to Brad Parks' Carter Ross series by reading the third book first. I enjoyed it so much that I immediately got my hands on the first two books and have also purchased books four and five. It just took me way too long to get back to reading this series, which is a perfect blend of humor and deadly seriousness.

That perfect blend begins with Carter Ross himself. He's a man with good instincts for the telling detail. It also doesn't hurt that he's compassionate and a five-star smart aleck. (Insert a different-- four-letter-- "a" word for the aleck.) He's also surrounded by a wonderful supporting cast: Szanto, the boss that only speaks in consonants (much to the befuddlement of us all); Tommy the gay Cuban intern; city editor Tina Thompson, whose biological clock is ticking so loudly it will deafen you. And these three are just the tip of the iceberg when it comes to the supporting cast.

I knew I was firmly in Carter's corner when he automatically did something that the media and so many others weren't doing: he humanized the deceased. This guy isn't just doing a job; he truly cares. Not only can Brad Parks fascinate you with the inner workings of a newsroom, he can make you laugh out loud with what Carter does to get information from a dangerous gang, and then he goes and tugs on your heartstrings. No wonder Faces of the Gone won multiple awards.

It better not be another three years before I read the second book in this series. I enjoy Parks' writing too much!