The House of Eyes by Kate Ellis 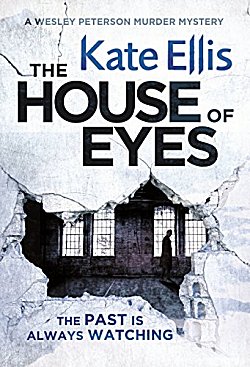 First Line: The infant reclines in his large new pram, shiny and black as a royal Rolls Royce and sturdy as a tank cutting through a battlefield.

When Leanne Hatman goes missing, no one seems concerned except for her father. After all, Leanne is an aspiring model and can't wait to leave the boring backwater of Devon for the bright lights of London. But when Leanne's father claims that a photographer has been stalking her, DI Wesley Peterson decides to look for the girl.

Leanne worked at Eyecliffe Castle, once home to the wealthy D'Arles family and now converted to a luxury hotel. When her father is found murdered on the castle grounds, police fear that Leanne has met the same fate-- but where is her body?

Meanwhile, archaeologist Neil Watson recently returned from an excavation on Sicily, has made a disturbing discovery near Eyecliffe Castle and tells Wesley that he met Leanne's alleged stalker on Sicily. Now that Eyecliffe Castle has become the center of many of the threads in his investigation, Wesley suspects yet another connection between these recent crimes and the disappearance of two girls back in the 1950s. This is a time of great stress for the detective inspector because not only is he immersed in one of the most challenging cases of his career, he is also experiencing a very personal nightmare.

I have been a fan of Kate Ellis's Wesley Peterson mysteries since the very first book, The Merchant's House. The series now spans twenty-two books, and as long as she writes them, I'll be reading them and urging you to do the same. Ellis is superb at blending present-day and historical mysteries as well as creating a cast of characters that become your friends as you read through the investigations.

Speaking of those characters, Wesley wonders about DC Rob Carter's ambition-- how far will it get him, and at what cost? We also experience more of Rachel's world's longest lead-in to a wedding (and longtime fans will know the reason why she's in no great hurry to get married). Wesley and Pam also have a scare that is beautifully handled, and Wesley's boss may be his old irascible self, but shouldn't he really start thinking about retirement? A wonderful cast of characters and we get first-rate mysteries to solve, too!

Wesley's friend, archaeologist Neil Watson, tends to get short shrift in the series, so I was happy to see that he not only had a larger role in the proceedings, he actually got to go to Sicily for a dig at the Temple of the Gods. (It was nice to see him out of the Devon mud.) Watson uncovers information about the creepy House of Eyes on Sicily as well as background on the D'Arles family and the Grand Tour that the son and heir went on in the 1780s. If you are a mystery lover who also loves a bit of history, this Grand Tour element should be right down your alley. It is also the perfect conduit for the chill factor that pervades the book all the way to the ending.

The House of Eyes is another strong mystery with excellent misdirection. This has always been a superb series, but somewhere along...say...book eighteen (The Shroud Maker), Kate Ellis seems to have raised her game into an even higher gear. I always try to stay a book or two behind in this series-- a safety margin of sorts so that I know I will always have something good to read-- but the way Ellis is writing now, this is harder and harder for me to do. Should all my reading dilemmas be so pleasant!