A Howl of Wolves by Judith Flanders 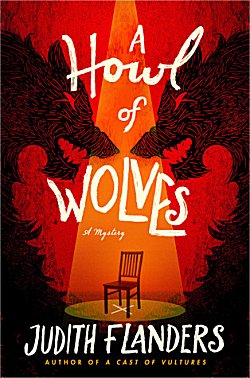 The old adage that no good deed goes unpunished certainly seems to be true for Samantha Clair. Having decided to spend a night out at the theatre in support of her upstairs neighbors who have small parts in a West End play, she discovers that her boyfriend doesn't care for bloody Restoration dramas with high body counts. When the curtain rises on the second act, the faux fatalities become all too real: the body hanging from the rafters is not a dummy, it's Campbell Davison, the director of the production.

As Sam learns more about the murdered man, she finds out he wasn't very well liked, so the suspect list grows-- and Sam can't help doing a little weeding of her own, especially if it will help the show go on for her upstairs neighbors.

About the only disagreeable thing I have to say about A Howl of Wolves is that the mystery took a while to get going, but then I didn't particularly care. This is a series in which I love the main character, and I love the way the author writes so I can forgive some things that other readers cannot.

Samantha Clair is basically a good person who's worked in a self-absorbed business for years... so that self-absorption rubs off from time to time. I adore her sense of humor, and I think I could live very happily inside her head (even though her paragon of a mother, Helena, would rapidly drive me around the bend). One of the perks of this series, I believe, is all the inside information readers glean, and this time A Howl of Wolves delivers twofold. Not only do we learn more about Sam's world of publishing, we're taken behind the scenes in the world of theatre.

This insider information helps to carry one of the themes that runs throughout the book: how society views the place of older women in the world. As Flanders expounded on her theme, I found myself with blood boiling one second and wanting to laugh and cheer the next.

Sam proves to be so good in digging up the dirt on the dead that I got caught up in the flow of the story and forgot to wear my deerstalker cap, so the killer's identity came as a bit of a surprise. (See what happens when one doesn't pay attention?) Now that I've devoured A Howl of Wolves, I find myself in a familiar position: waiting patiently for Samantha Clair to put down her editing pen and start investigating murders once more.