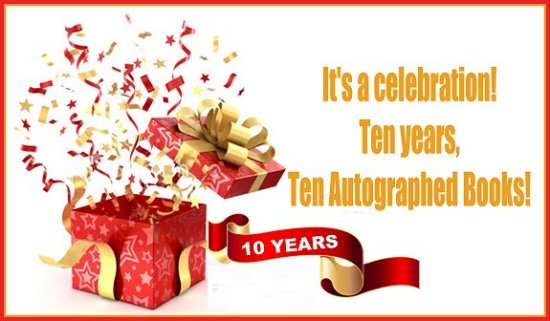 I can't believe that I'm already on the last week of my tenth anniversary celebration, and all you folks who have been entering in the drawings to win my stash of autographed mysteries are certainly keeping me on my toes. I would like to give one word of warning: Some of you aren't paying attention to the deadline of each giveaway and are trying to enter giveaways that are past their sell-by (give-by?) dates, so be careful!

This last week starts off with the most recent entry in one of my favorite cozy series, Vicki Delany's The Cat of the Baskervilles. I could go on to say that I like whatever Vicki writes, but I must keep focused! 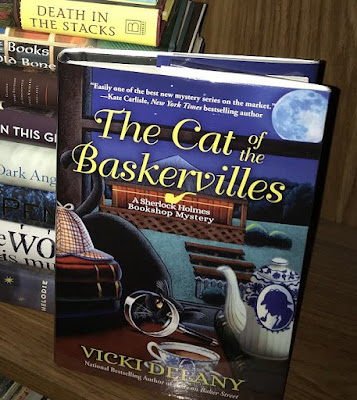 "Legendary stage and movie star Sir Nigel Bellingham arrives on Cape Cod to star in a stage production of The Hound of the Baskervilles put on by the West London Theater Festival. When Sir Nigel, some of the cast, and the director visit the Sherlock Holmes Bookshop at 222 Baker Street, Gemma Doyle realizes that Sir Nigel is not at all suited to the role. He is long past his prime and an old drunk to boot. The cast, in particular the much younger actor who previously had the role, is not happy, but the show must go on.

Before the play opens, Leslie Wilson, mother of Gemma’s best friend Jayne, arranges a fundraising afternoon tea to be catered by Mrs. Hudson’s Tea Room. The tea is a huge success, but when it’s time to leave, Sir Nigel has gone missing—only to be found at the bottom of the rocky cliff, dead. Along with the dead body, Gemma finds evidence incriminating Leslie Wilson. When the police, in the presence of handsome detective Ryan Ashburton and suspicious detective Louise Estrada, focus their attention on Leslie despite the numerous other suspects, the game is once again afoot and it’s again up to the highly perceptive Gemma and the ever-confused but loyal Jayne to clear Jayne’s mother’s name."


How can you win an autographed copy of this book? I thought you'd never ask!

Your entry must be posted by midnight (Arizona time), Wednesday, June 27. The winner will be notified and the book mailed later that same day.

Beware! If you don't follow all of the rules, your entry will not be included in the drawing, but there's one thing you don't have to worry about-- as soon as the winner's name has been drawn, all your names and addresses will be destroyed.


You can enter the drawing for each and every book, but you will be able to win only one. Ten years, ten books, ten winners. I want to distribute the wealth evenly among you all.