The Cat of the Baskervilles by Vicki Delany 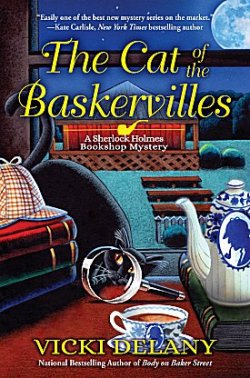 First Line: "The footsteps of a gigantic hound!"

The West London Theater Festival is about to start and even though he's long past his prime Sir Nigel Bellingham is set to star in their production of "The Hound of the Baskervilles." Well, he is until he's found dead at the bottom of a cliff after attending a fundraiser. With the mother of Gemma Doyle's best friend Jayne firmly in the police department's crosshairs as the prime suspect, Gemma has her work cut out for her to find the real killer.

I'm pleased to say that Gemma is back to her slightly abrasive, blunt self in The Cat of the Baskervilles after a slight digression into the land of cookie-cutter cozy heroines who are nice beyond the realm of possibility and would never say anything outrageous aloud. I like the fact that Gemma has a bit of an edge to her personality every bit as much as I like her breaking and entering outfit, her set of lockpicks, and the fact that she's OCD about the stock on the shelves of her Sherlock Holmes Bookshop.

I'll even repeat myself about the resident cat who hates Gemma with a passion: Moriarty would be licking his whiskers in a land far, far away if I were Gemma, and Gemma's dog Violet would be the four-legged resident ensconced in the bookshop. There's only so much hissing and shredded skin that I'm willing to put up with.

Gemma's friend, Jayne, surprised me a bit in this book. She's quite demanding and very good at ordering Gemma around-- but then her mother is a suspect in a murder investigation. That might make me a bit bossy, too.

As you can tell, I do enjoy the characters in Vicki Delany's series-- even Uncle Arthur who's yet to make an appearance because he's too busy globetrotting. (Not bad for a man in his nineties!) But this series isn't just about a finely-tuned cast of characters. There's a good mystery to solve as well and color me smug when I picked up on a clue that even the sharp-eyed Gemma didn't. Did that mean that I had the mystery solved ahead of time? No, but I still gave myself a bonus point for noticing it.

Delany's series is among my favorite cozies for its cast of characters,  the bookshop setting, and the investigations. It also doesn't hurt that I smile every time I recognize the stock in Gemma's shop. When you read this author's Sherlock Holmes Bookshop mysteries, you're not only reading good mysteries, you're being given recommendations for others, too!