A Siege of Bitterns by Steve Burrows 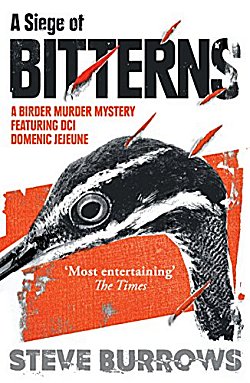 First Line: At its widest point, the march stretched almost a quarter of a mile across the north Norfolk coastline.

Domenic Jejeune is a poster boy for the police. The newly appointed detective inspector has been reassigned to the small Norfolk town of Saltmarsh, right in the heart of England's premier birding territory. This suits Jejeune right down to the ground because, no matter how good a detective he is, he'd much rather watch birds.

The chief superintendent's high hopes are deflating fast when Jejeune insists that the death of a prominent ecological activist involves a feud over birdwatching lists. When a second murder occurs, Jejeune finds himself battling the mistrust of his colleagues and his own insecurities... but he just knows that he's right about those birdwatching lists!

Highly recommended by a trusted source, I began reading A Siege of Bitterns with a great deal of anticipation. I love British police procedurals as well as watching birds, so this book had all the earmarks of a winner. Alas, it was not meant to be. For a first book, the main things are good: the story, the setting, and the characters. Burrows puts us right in the marshes of Norfolk, and the mystery is genuinely puzzling. Jejeune, on the whole, is an interesting character, but.

You were waiting for that, weren't you? The execution did not live up to the promise. The book needed more editing to tighten it up and make the story flow smoother and faster. One of my pet reading peeves is when we are constantly told about a character instead of letting us find out for ourselves. This is what happens with Domenic Jejeune. At almost every turn, we are told what an exceptional person he is instead of simply being shown by his words and actions. I hate to say this, but midway through the book, I found myself fighting to stay awake, and that continued throughout the rest of the story.

As I've said before, this is a first book, and the issues I had with it can all be fixed. I'm just not sure that I want to venture into book number two. Your mileage may certainly vary-- and I hope that it does!