The House at Baker Street by Michelle Birkby 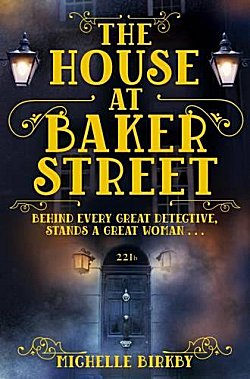 First Line: It started with champagne and promises on a sunny afternoon.

Mrs. Hudson is a 48-year-old widow whose only child is also dead. Instead of withering away in the country, she decided to become the landlady of one of the London properties she inherited from her husband.

Sherlock Holmes has been her tenant for a few years now. Mrs. Hudson knows his habits, has cleaned up all of his messes, and she's upped his rent accordingly. She's also learned a thing or two by sitting beneath the air vent in the kitchen listening to Holmes and Watson solving their cases.

When Holmes is particularly churlish in turning away Mrs. Laura Shirley, she and Mary Watson unanimously agree to help a fellow woman in need. They'll investigate Mrs. Shirley's case themselves. It doesn't take long for them to realize that Laura Shirley is not the only woman at risk. With the help of the Baker Street Irregulars and Irene Adler, Mrs. Hudson and Mary Watson find themselves untangling a dangerous web of blackmail, libel, extortion, and murder-- a case worthy of the great Holmes himself.

I immediately came under the spell of Mrs. Hudson's voice in Michelle Birkby's wonderful mystery, and when I read the scene on page twelve in which she listens to Holmes through the air vent in her kitchen, I got a smile on my face that never completely went away the entire time I read The House at Baker Street.

I've never been a fan of Sherlock Holmes. Of his logic and deductive capabilities, yes, but not the man's attitude and behavior toward others. For decades, I've also wanted to know more about Mrs. Hudson. I knew that she could not be a mere Victorian stereotype of an older woman. Just think of all she's had to put up with from Holmes-- and she's never once run screaming into the night. Birkby took all of my questions and suppositions (and much, much more) and turned them into a delightful mystery that is very difficult to piece together. Yes, a book with a pitch-perfect setting, marvelous characters, and a tough mystery to solve-- isn't it great?

Perhaps my favorite quote from the book is this:

I had to prove it, I insisted.

That I'm not a silly old woman who's only fit for baking cakes! I shouted.


That one quote alone will strike a chord with many readers if I'm not mistaken. The House at Baker Street grabbed me quickly and would not turn me loose. It made me feel a wide range of emotions-- from laughter to dread to fear to sorrow and even anger. I can't wait to get my hands on the next book-- and I won't be waiting for the US edition either. Speaking of which, this will not be released in the US until the end of October. Put it on your wishlist now, but don't worry-- I'll be jogging your memory about it in a few months' time!