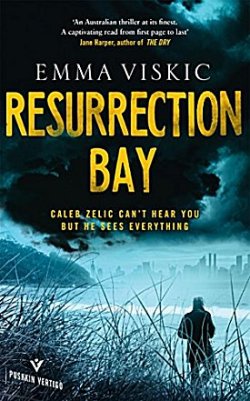 First Line: Caleb was still holding him when the paramedics arrived.

Caleb Zalic's childhood friend has been brutally murdered, and Caleb has vowed to find the killer. Most people would think that his profound deafness would prevent this from happening, but Caleb is excellent at reading people, and his business partner (and ex-cop) Frankie is more than capable of doing her part.

They've barely begun investigating when it's made crystal clear that the killer is on his trail. Fearing for his ex-wife, Caleb insists on leaving Melbourne and returning to their hometown of Resurrection Bay. Continuing his investigation from there, Caleb learns that everyone-- including his murdered friend-- is hiding deep, dark secrets that could very easily get him, and everyone close to him, killed.

Author Emma Viskic's idea of creating a main character who's almost totally deaf is brilliant. Caleb lost most of his hearing as a result of a childhood illness. He depends on lipreading and replying by voice, which leads to the occasional misunderstanding, but he doesn't want his disability to be the main thing people remember about him. He's got trust issues with two of the people closest to him: his brother Anton, a recovering drug addict, and Frankie, a recovering alcoholic, and he shows it in ways guaranteed to make the two furious. Nothing like a few fireworks to move the story along, eh?

Resurrection Bay's pace is swift and sure, and Caleb's deafness is particularly effective in the action scenes; written from Caleb's point of view, they put readers off-stride and at a definite disadvantage. There's a lot to like about this book, but two things didn't sit well with me.

One-- this book is supposedly set in Australia, but it could really be anywhere. If it weren't for the occasional use of the slang "ambo" for ambulance and the fact that Caleb's ex-wife is an Aboriginal woman, you'd never know you were Down Under. Perhaps the slang and any other overt descriptions of the setting were consciously removed to make it more palatable to an international readership, but this just leached much of the color from the book for me. Two--No matter how good the story or the pacing or Caleb's deafness is, I really didn't care about anyone in the book. In fact, I was looking at all the characters with such a jaundiced eye that I guessed the big surprise well before its reveal at the end.

So... there's a lot of good storytelling to be found in Resurrection Bay as well as a very interesting main character, but it fell a bit short for me. Of course, your mileage can-- and probably will-- vary!