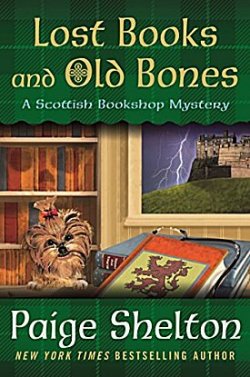 First Line: The cold liquid splashed the back of my neck before it rolled down and underneath my shirt.

Delaney Nichols may be a long way from her native Kansas, but she's feeling right at home in Edinburgh, Scotland. She has a job at the Cracked Spine Bookshop that she loves; she has a boyfriend who looks amazing in a kilt, and she's made all sorts of friends.

Two of her newest friends, in need of money for medical school, came to the Cracked Spine with a set of antique medical books. Delaney's boss immediately agrees to purchase the books. A few days later, the friends meet for drinks, but when one of them is found murdered in the alley behind the bookshop, Delaney has to wonder if there's a connection between the young woman's death and that set of old books. Taking it upon herself to bring the killer to justice, Delaney finds ties to the infamous Burke and Hare-- two nineteenth-century men who went to unusual lengths to supply a doctor with bodies for his anatomy classes. She's going to have to work fast to avoid becoming old bones herself.

Paige Shelton's Delaney Nichols is living one of my dreams-- working in a bookstore in Scotland. The series has shown her slowly making a comfortable life for herself. At first, there were new friendships with the people who own the house she rents as well as with the people she works with; then there was the delectable boyfriend, and in Lost Books and Old Bones, she's made friends outside of work and home. As she becomes more comfortable, so do I as a reader.

There are a couple of things I really enjoy about this series: one, the grownups act like grownups, and two, Delaney never acts like the Lone Ranger (minus Tonto). Whenever she learns something, she immediately shares it with two detective inspectors. Of course, it helps that the police don't behave like idiots, but it's still good to see a total amateur who doesn't automatically feel as though she's miles better than trained professionals.

The graverobbing/murder angle brought into the story was a good addition, and Delaney's work was cut out for her because several of the characters believed that, if they shared all they knew, they'd look guilty. Naturally, their omissions made the police look at them even closer. (Can't beat human nature, eh?)

Lost Books and Old Bones is a very enjoyable read, and if you haven't read any of the books in the series, I suggest you begin with the first book, The Cracked Spine.