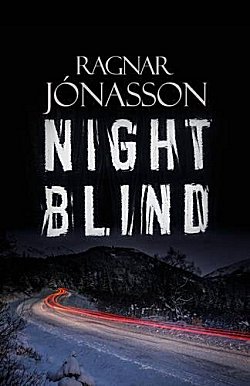 First Lines: Unsettling. There was something unsettling about that ancient, broken-down house.

When a local policeman-- and Ari Thór Arason's boss-- is murdered, the peace and quiet of Siglufjörđur is shattered. Ari Thór assumes that he will be leading the investigation into his superior's death, but the mayor of the fishing village on the northernmost tip of Iceland brings in the man Ari Thór originally trained with several years previously.

The dark Arctic winter is closing in and there's a killer on the loose. As the two men investigate, they learn that there are many factors in this murder that need to be dealt with-- and some of those factors tie into tragic events in the past.

This is the third of Ragnar Jónasson's Dark Iceland series published in English that I've read, and I've read the books in chronological order rather than by publication date. An earlier book, Blackout, was one of the best books I read in 2017. Jónasson does a stellar job of describing his Icelandic setting and its climate. In Nightblind, a new tunnel has been constructed which prevents the small fishing village from being completely cut off from the outside world during the heavy winter snowfall, but that convenience comes at a price: outsiders are bringing problems and crime to Siglufjörđur.

The mystery in Nightblind is an interesting one, but it slowly sinks under the weight of all the characters' personal problems.The occasional journal entries that readers are given do tie into the mystery, and there's a slowly developed surprise that's revealed at the end, but all those personal problems sapped my interest in the mystery. Nightblind is still a good read; it's just not on par with Blackout.