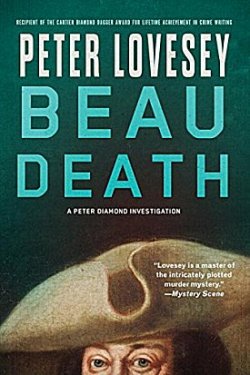 Progress is coming to Bath, England in the form of a new supermarket, and the wrecking crew is demolishing an old row of townhouses to make room. But progress comes to a screeching halt when the side of a building collapses and a skeleton is seen in one of the attics.

The dead man is wearing authentic clothing from the 1760s, and on the floor beside him is a white tricorn hat-- the signature accessory of Beau Nash, one of Bath's most famous historical men, a fashion icon said to be buried in a pauper's grave. Or did the Beau end up in this rowhouse attic instead?


Chief Inspector Peter Diamond has been assigned to identify the remains, and he would love to set Nash scholarship on its ear, but one of his constables is stubbornly insisting that the corpse can't be Nash's. Is Diamond on an historical goose chase, or should he actually be investigating a much more modern murder?

In Beau Death, Peter Lovesey has created a mystery that resembles a Russian nesting doll, and it is a sheer delight to read. In this outing, readers learn about a very real person in eighteenth-century Bath, Beau Nash, and Diamond is led on a merry chase in his attempts to identify the skeleton in the attic. Of course, present-day murders won't leave his team alone, so it's not long until they have several "plates" spinning in mid-air.

The plotting is deft and very intricate without being overdone, and the characters perform beautifully. Diamond is suitably choleric in dealing with his superior officer and a recalcitrant member of his team, and there's a forensic expert named Waghorn that he'd dearly love to toss in prison. Ingebord is her usual sterling self, and there's a new constable named Paul Gilbert who shows a great deal of promise. Also, there are brilliant little observations scattered throughout about such things as whiteboards, cornflakes, cocaine, and men's underwear.

As I said before, Beau Death is an absolute delight to read. I've enjoyed the few books in this series that I have read, and one of these days I vow to make the effort to go back and read them all. There's a very good reason why Peter Lovesey has won lifetime achievement awards: he knows how to tell a tale that will keep you hooked from first page to last.