And Death Goes to... by Laura Bradford 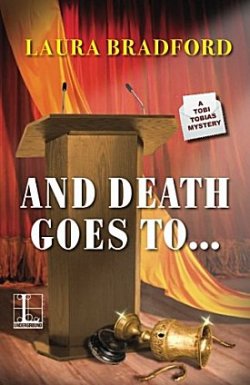 First Line: You know the kid who lurks at the top of the stairs, listening to adult conversations they're not supposed to hear?

The St. Louis Advertising Awards are the area's Academy Awards for those in that field, and the Tobias Ad Agency has been nominated for its most prestigious prize, Best Overall Ad Campaign. Naturally, Tobi Tobias wants to win, but she isn't shocked when she doesn't. What does shock her is when the winner takes the stage and plummets to her death when a platform gives way.

Tobi's Grandpa Stu is on hand to help compile a list of suspects, but the first question that Tobi must answer is... Was the dead woman the intended victim? Other lives may depend on the answer.

Laura Bradford provides a solid mystery filled with twists and turns. I enjoyed trying to identify the killer, and I also greatly enjoyed the fact that there was a significant decrease in the use of all of Tobi's nicknames, which I found so distracting in the previous two books in the series. But in some ways, the mystery was overshadowed by Tobi's personal life.

Many times Tobi has mentioned the fact that she's "almost thirty" as though she has the wisdom of the ages at her disposal, but her behavior has proven otherwise. I was thrilled to bits that Tobi finally put on her big girl panties to deal with a situation in a truly adult manner. In some ways, this series could almost be considered the coming of age story of its main character.

As you can tell, I've let Bradford's characters get under my skin while I've been enjoying the mysteries they solve and the advertising background the author provides! The same thing will probably happen to you.