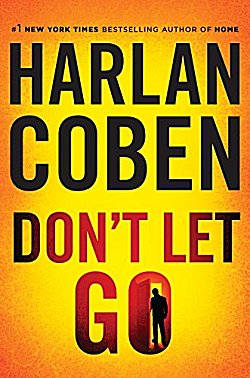 First Line: Daisy wore a clingy black dress with a neckline so deep it could tutor philosophy.

His senior year of high school was rough on New Jersey homicide detective Napoleon "Nap" Dumas. His twin brother Leo and Leo's girlfriend Diana were found dead on the railroad tracks, and Maura, the girl he considered the love of his life, broke up with him and vanished. Nap can't let those events go. Fifteen years have passed and he's still searching for Maura and he's still searching for the real reason behind his brother's death.

Now he may have the break he's been looking for. Maura's fingerprints are found in the rental car of a suspected murderer; however, as Nap begins his investigation, all he gets is more questions. The answers surrounding Maura, Leo, Diana-- and that abandoned military base near where he grew up-- are far more sinister than Nap ever imagined.

I've come late to the Harlan Coben party, so I have quite a few books to choose from. After reading only one book-- and now this one-- I've grown to enjoy Coben's writing style and his sense of humor. In Don't Let Go, he's crafted an engrossing storyline about how recent murders tie into the death of his beloved brother Leo, a brother he still talks to each and every day. In fact, this story is told to Leo, and if you think that makes Nap rather strange, so be it.

Between the story and the character of Nap, there was no way I was going to stop reading this book. Nap is fascinating, a man who's always felt as though he needs to play a part:

"I'm friendly like that. Mr. Nice Neighbor. See, I am the rarest of creatures in suburban towns-- a straight, single, childless male is about as common out here as a cigarette in a health club-- and so I work hard to come across as normal, boring, reliable."


Nap is anything but boring, but in his utter determination to find out what really happened to his brother, he is the epitome of reliability. When all the pieces of the story begin coming together, the momentum picks up like a runaway freight train. I was all set to sing the praises of Don't Let Go to everyone who'd listen... until the villain was revealed. The villain is the type of character I've been seeing frequently in my reading as well as in movies and on television, so when I learned whodunnit, I groaned out loud in disappointment. So... my opinion dropped from Excellent to Very Good. But it goes without saying (although I'll say it anyway)-- your mileage may certainly vary.

Thriller, Standalone
Rating: B+
Source: Purchased at The Poisoned Pen.