That Touch of Ink by Diane Vallere 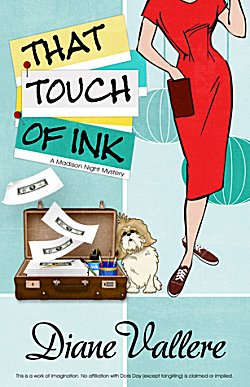 First Line: The money arrived on a Tuesday.

When a rare $5,000 dollar bill arrives in the mail, interior decorator Madison Night knows it's a message from her past. Suspecting the bill means trouble, she makes an appointment with a specialist, but when she arrives all she finds is an abandoned office, a scared dog, and a dead body-- and he's not the specialist.

Lt. Tex Allen and his team on the Dallas Police Force are on the case, but it's Madison who discovers the dead man's identity. And that's not all she finds. Throw in a kidnapping plot, a counterfeit operation, and the true value of Madison's independence.

Diane Vallere's Madison Night series continues to be my Find of the Year. Normally I do not let myself read more than one book in a series per year. This works well because there are dozens of series that I follow closely. But when I fall for a series as hard as I did this one, that rule can go out the window. I began by reading the most recent book, The Decorator Who Knew Too Much, then I bought the rest of the books. I've only got one left to be completely caught up, and the question is-- will I be able to hold off reading it until next year?

The main reason why I kept ignoring these books is due to the covers, even though they do remind me of all the patterns my grandmother the seamstress had when I was growing up. These covers have a tendency to make the books appear to be-- there's really no nice way to put it-- nothing but fluff. If you go so far as to read the synopses and realize the titles are based on old Doris Day movies and that Doris Day is the main character's role model, you might be excused for shaking your head and walking away. Except-- you're reading this review, and now you know better.

Like the other books in the series, That Touch of Ink has a strong mystery, full of twists and turns and suspense galore. They have Style, just like Madison's clothes and interior design business. The cliffhanger from Madison's personal life is resolved from book one (Pillow Stalk), and there are three men attracted to this woman, which may (or may not) shock younger readers because Madison is forty-seven, single, has never been engaged or married, and has a bum knee (so she knows she's not Wonder Woman). I was very pleasantly surprised at how well Doris Day translates into twenty-first-century life.

Even if you're not familiar with Doris Day, you're going to like Madison and sympathize with how hard she's had to work to live the life she wants. If you are familiar with the versatile actress/singer, like I am, you just might find yourself watching some of her films. Whether you do or not, the one thing you must do is read these books! They are a delight.