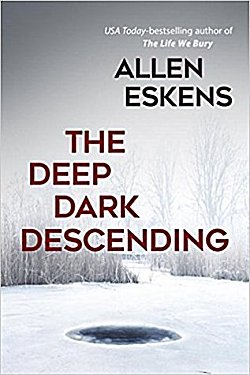 First Line: I raise the ax handle for the third time and my arm disobeys me.

Homicide detective Max Rupert has never stopped grieving for his wife. He's never accepted her death, even when he believed she was the victim of a hit-and-run driver. When Max learns that Jenni was murdered, he goes off the rails.

Now he's got to balance his workload and tap dance around an impossible superior officer while he devotes himself to hunting down the people responsible for killing his wife. All this leads him to a frozen lake on the border of Minnesota and Canada where he will make decisions that will change his life.

I've been a fan of Allen Eskens' mysteries since the very first one, The Life We Bury. The four books so far are all loosely gathered around the character of Max Rupert. Readers have seen what a decent, dedicated, hard-working man he is from one book to the next, and now in The Deep Dark Descending, we all have front-row seats to watch what grief and rage can do to such a good man.

The mystery is solid. Why on earth would anyone want to kill a woman who dedicated herself to helping endangered children? The official case Rupert is involved in deals with catching a man who killed a woman, put her body in a minivan, and then set the vehicle on fire. The two cases are a study in contrasts because the minivan murderer could easily be eligible for a Darwin Award.

As with all of Eskens' mysteries so far, these books are about much more than merely figuring out whodunit. They are rich character studies. In The Deep Dark Descending, Max Rupert's descent into uncontrollable vengeance is told in two converging, clearly marked storylines. We see Max on that frozen lake at the Canadian border, and we watch Max in Minneapolis during the days leading up to his journey north. This is compelling storytelling that often elicits strong emotional responses.

I look forward to Allen Eskins' next book with a great deal of anticipation. This man can write.