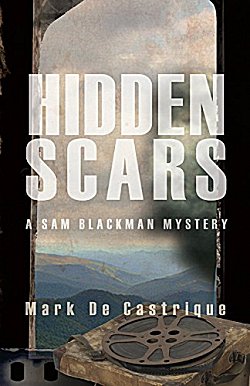 First Line: My partner, Nakayla Robertson, had taken a long weekend in Charleston with the women in her book club for the annual retreat they called "Reading Between the Wines."

When an elderly friend of private investigator Sam Blackman asks him to stop by the nursing home, Sam quickly finds out that his friend had an ulterior motive. An eighty-year-old resident wants Sam to look into the suspicious death of her brother back in 1948, even though Sam tells her that there is very little chance that he'll find anything.

The woman's brother, Paul Weaver, was a World War II veteran enrolled at Black Mountain College, a liberal local school, with an international reputation for innovation, thanks to a stellar faculty and advisors like Buckminster Fuller and Albert Einstein. Sam learns that a movie is currently being filmed which is set at the college, so he heads over to talk with the author upon whose book the movie is based. A man helping out on the set has information for Sam, but is murdered before Sam can talk to him. This death-- and one following it-- turn a cold case white hot.

If you haven't read a Sam Blackman mystery yet, I highly recommend that you remedy your oversight. Mark de Castrique writes one of the best private investigator series going, and I always look forward to each new installment. Sam Blackman is a former Army Chief Warrant Officer who lost his leg in Iraq. He and Nakayla Robertson are partners in both their professional and personal lives; they're an interracial couple loaded with intelligence and humor and have a wonderful support team that includes a lawyer and a police officer there in Asheville, North Carolina.

These Sam Blackman mysteries always have something to do with Asheville's little-known yet fascinating history-- this time concerning Black Mountain College. The mystery not only involves the college, it also ties in present-day political shenanigans in the state's film industry as well as lingering racial tensions. The mystery in Hidden Scars moves smoothly and steadily to its conclusion, and I've found time and again that it's very easy to be seduced by de Castrique's story and forget to come up for air. And that humor I mentioned earlier? The humans don't have all the good scenes; Blue the coonhound and a rhinestone collar-wearing raccoon also have their parts to play.

I really enjoy this author's writing style. When I open one of his books, I feel as though I've stepped into his characters' lives. With each book's past woven into the present, de Castrique doesn't have to remind me of one of my favorite lines in literature: "So we beat on, boats against the current, borne back ceaselessly into the past." Don't like The Great Gatsby? Don't let that keep you from getting acquainted with this excellent series.