The Being Chased by Monsoons Weekly Link Round-Up 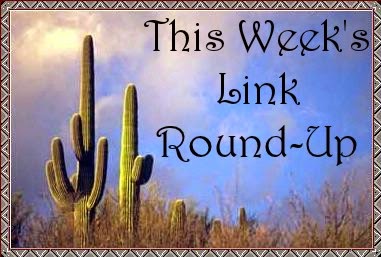 When I first moved to Phoenix in 1976 and heard the term "monsoon," I wondered why on earth people were talking about these rainstorms like they actually happened here. You see, I just knew monsoons from my reading and Hollywood movies. I thought they only occurred in places like India.

Moving to Arizona expanded my knowledge. You see, the term monsoon refers to any seasonal rain, and that's exactly what we get here in the Sonoran Desert, usually beginning sometime around the Fourth of July. We have cool air masses moving down from the high mountains to the northeast slamming up against warm air masses moving up from the south, often in the late afternoon. They are often preceded by a haboob-- what we used to call a dust storm, but haboob sounds so much more intriguing, doesn't it?

Since Phoenix has gotten so huge, we've changed monsoon season. Now microbursts are happening with greater regularity, and I hate them because they fill my pool with mud and debris and sometimes even flood the house. If you want to see an amazing photo of one, this is the microburst that flooded my pool last July. It's basically a tremendous wall of water coming down from the sky.

We've had some monsoon activity this week, and so far I've been chased out of the pool two days in a row. Once by a haboob (which had me spitting dust for a while) and the second time by the grumble of nearby thunder. You're not going to find me sitting in a pool when there's a chance of lightning!

Speaking of monsoons, I'd better head on out to the corral and take care of those links. The sky is grumbling again, so... head 'em up! Moooooooooove 'em out!