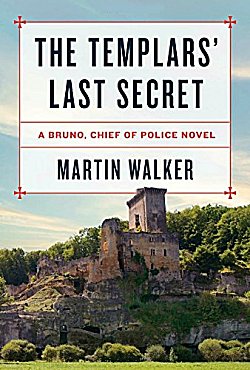 First Line: Bruno Courrèges, chief of police of the small French town of St. Denis, awoke a few seconds before six, just as the dawn was breaking.

When a woman's body is found at the foot of a cliff, Bruno believes that there is a connection to the ruined Château de Commarque which stands high atop that same cliff. What he doesn't need is a young woman from Paris following him around for a week recording how he does every little thing. Not in the middle of an investigation!

Fortunately for him, Amélie proves to be an excellent addition. With her help, Bruno learns that the dead woman was an archaeologist searching for an incredibly important artifact-- and that she had ties to Islamic terrorists. The terrorism angle alone puts formidable pressure on the chief of police. Will he be able to solve the case and still find time to enjoy good food, good wine, and a pretty woman or two?

In reviewing the last book in this delightful series, Fatal Pursuit, I admitted that I was tiring of the formula the series had fallen into, and I hoped that the next book would shake things up a bit. It does, and I couldn't be happier.

The Templars' Last Secret teases us with castle ruins, caves, Templar treasure, and prehistoric art, but what it's really about is policing in France, especially since the terrorist attacks. We are shown how the French government reacts to certain situations and how countries are now working together against a deadly common foe. One of the ways that policing has changed is by the use of technology and social media to solve crime, and the character of Amélie is just the sort of person to show a reluctant Bruno how vital it can be.

Amélie adds quite a bit to the story, not only with her technical expertise but by her very nature. It was fun to watch her interact with the people of St. Denis and to see their reactions to her. I'm hoping that this will not be her last appearance in this series.

Yes, Martin Walker has rejuvenated his series that I love so much, and I'm looking forward to the next book with great anticipation.