Books of a Feather by Kate Carlisle 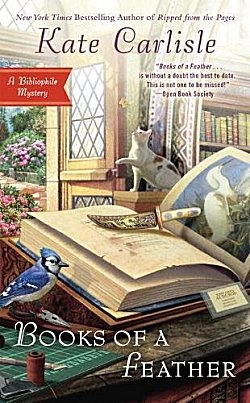 First Line: The air inside the old bookshop was thick with the heady scents of aged vellum and rich old leathers.

During the Covington Library's gala celebrating John James Audubon's Birds of America, book restorer Brooklyn Wainwright agrees to attempt the repair of one of Audubon's lesser known books. At the very same party, she's on an emotional high when she's also asked to refurbish a rare copy of Poor Richard's Almanack. But her euphoria comes to a screeching halt when she finds Jared Mulrooney, the person who asked her to repair the Audubon book, dead in the library.

It's the job of the police to find the killer, but when Brooklyn begins to concentrate on her work, she's interrupted by a surprise visit from her parents who bring a rather unsavory friend with them. And who is that strange man who's following her around? Brooklyn's got to find out what she has that someone else wants very badly.

I began reading Kate Carlisle's Bibliophile mysteries when the series first began but stopped because I soon became consumed by an irrational loathing of one of the secondary characters. After being told that this character is no longer around, it didn't take any persuasion at all for me to begin reading once more.

I did find the mystery in Books of a Feather to be rather easy to solve, but that didn't bother me one little bit. Like all the best series, the mystery is important but the cast of characters and the setting are key. A beginning that has Brooklyn cataloging the books in an old shop and finding treasure after treasure immediately put me firmly in book lover's heaven.

With Brooklyn's personal and home security at risk, her friend Alex devises a series of self-defense exercises for her. I really liked this, since so many amateur sleuths in cozy series consistently put themselves (and others) at risk without doing a single thing about learning how to defend themselves. (I do appreciate common sense!) These self-defense exercises lead to my favorite line in the book, too-- "That's my mommy!"

After a long hiatus from the series, I loved catching up with what's been happening in Brooklyn's life as well as learning little tidbits. Did you know that the people living in San Francisco have given the omnipresent fog a name? Neither did I. But the absolute best thing about coming back to Carlisle's Bibliophile series is being able to watch Brooklyn work on old books. Watching her restore old treasures is sheer bliss and makes me feel that-- at that moment-- all is right in my world.

Now that I'm back in the fold, I'm looking forward to Brooklyn's next adventure. Bring it on!