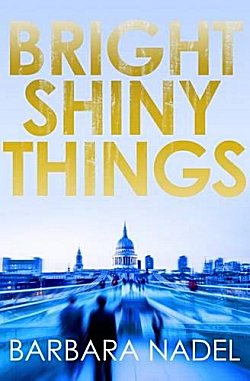 First Line: As the body hit the floor, some of the dead man's blood caught the side of her face and she gasped.

Abbas al'Barri worked as an interpreter with ex-soldier and private investigator Lee Arnold during the Second Iraq War, so when he comes to Arnold for help, Lee feels obligated to do what he can.

Abbas has an estranged son who was last thought to be fighting for ISIS in the Middle East, but Abbas has received a message that has him convinced that his son has had a change of heart. Abbas is desperate and needs Lee's help in establishing contact with his son, and Lee feels that his Muslim assistant Mumtaz Hakim may be able to play a vital part in this assignment.

I am familiar with Barbara Nadel's excellent mystery series set in Turkey that features Inspector Çetin Ikmen, so I was more than happy to read this Hakim and Arnold book. For years I was one of those readers who insisted on reading every series in numerical and/or chronological order, no exceptions. However, I've been loosening the stranglehold that rule has had over me with (mostly) successful results. A majority of the series I've begun "in the middle" have had enough back story provided that I don't feel lost. This was not the case with Bright Shiny Things, the fifth in Nadel's Hakim and Arnold series. I definitely felt at a disadvantage with the two main characters. I never really got a feel for either Arnold or Hakim, and since I am a character-driven reader, this was a bit off-putting.

Even though I didn't feel comfortable with those two characters, the story drew me in. Nadel took me by the hand and led me straight into a world I scarcely knew existed-- the inner workings of immigrant populations in the East End of London and how some of the young people could fall under the spell of something like ISIS-- and how ISIS recruits others to join its ranks. One of the best parts of the book has Mumtaz Hakim impersonating a young Muslim girl online. What she learns, and what happens as a result of her impersonation, is eye-opening and chilling.

Nadel is an excellent writer, and after reading Bright Shiny Things I definitely want to go back to the beginning of the series to see what I missed. I know I will be richly rewarded.