The Wind Off the Small Isles by Mary Stewart 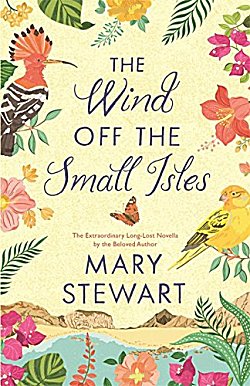 First Line: She knelt on the window-sill, looking out over the sea.

Lanzarote, the strangest and wildest of the Canary Islands. In 1879, a wealthy young woman eloped with a poor fisherman from this windswept volcanic island. In 1968, Perdita West, personal assistant to famous author Cora Gresham, arrives there with her employer on an extended research trip. Both women fall under the island's spell, and Perdita is quite impressed when meeting Cora's son, Mike.

When Cora goes off to do research, Perdita takes the opportunity to go snorkling, but a landslide traps her in an underwater cave. No one knows where she is, so she has to rely upon herself for rescue. Her efforts to escape will solve a century-old mystery.

This little novella is a gem. Stewart brings Lanzarote to life effortlessly. The 1879 story is extremely brief but memorable while the adventures of Perdita and Cora are picture perfect and often humorous. As a person who will not step foot underground, I can attest to the fact that the scenes in which Perdita is trapped in an underwater cave can raise your blood pressure. (I also think I had a death grip on the book.)

So much goodness in so few pages. No wonder Mary Stewart was a bestselling author back in the day. Other than the lack of today's electronic accoutrements, The Wind Off the Small Isles holds up every bit as well as it did when first published.