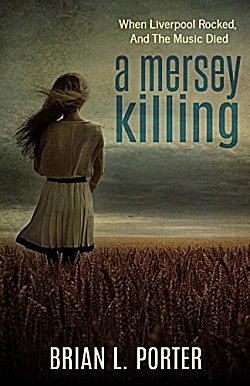 First Line: The Cavern Club in the spring of 1961 was, to use the idiom of the day, "really rocking."

The music scene in Liverpool, England in 1961 has all sorts of young people coming together in an attempt to achieve fame and fortune. This holds especially true for a group called the Planets led by singer Brendan Kane. But money is running very short, and if they don't get noticed by someone like Brian Epstein soon, they're going to have to give up on their dream.

In 1999 during the renovation of Liverpool's docklands, skeletal remains are found buried in the mud alongside a derelict dock. Searching for the dead person's identity and trying to find a killer is going to take Detective Inspector Andy Ross and Detective Sergeant Izzie Drake on a journey straight back to the early days of the Mersey Beat.

A Mersey Killing is an example of a good story being let down by very poor editing. Run-on sentences, a man who forgot he'd taken his pants off so he took them off again, countless times when "then" was used instead of "than," and other errors were distractions that took away from a mystery set in a location and time period that I found very interesting.

The characters all seemed to be Good or Bad with no middle ground, although I did like the main characters of Andy Ross and Izzie Drake. I'd deduced the identity of the killer very early on, but what kept me reading was-- as I've said before-- the time period and the Liverpool setting, as well as a cold case from the same period involving a missing woman. The missing woman was the most interesting part of the mystery.

Since there are no guarantees that the editing has improved in the next books, I'll be giving the rest of this series a miss. I just don't have the patience to deal with keeping score on editing errors. It's a shame.