Death on Nantucket by Francine Mathews 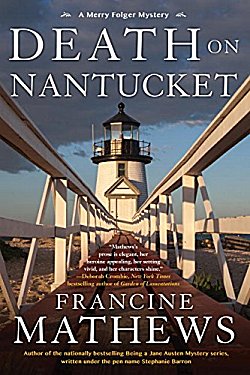 First Line: The shadow of the Cessna flitted over the white-capped waves of Nantucket Sound, swift and elusive as a gull's wing.

There is a national treasure living on Nantucket Island. Spencer Murphy is a famous Vietnam War correspondent who escaped captivity and in the decades since has made a fortune from his books and personal appearances. But Spencer has become forgetful with age, wandering and even failing to return home one night. Then a body is discovered at his estate, and Nantucket police detective Meredith (Merry) Folger comes to investigate.

As far as investigations go, the timing couldn't be worse. It's the Fourth of July when tourists come to the island by the thousands and extra police have to be brought in from the outside. Merry is also planning her wedding and dealing with an aggressive new police chief who seems to want her to quit. She's also forced to deal with a family of unreliable narrators, and she's worried that the truth may be trapped in the failing brain of Spencer Murphy, thus forever out of reach.

Francine Mathews has been one busy writer. When approached by her publisher to write another of her Merry Folger mysteries-- a series she wrote in the mid- to late 1990s-- she agreed on one condition: that she rewrite the first four books to bring them up to date. Having read and enjoyed the books in their first incarnation, I have to admit that I am interested in the updated versions.

Death on Nantucket continues the things I liked so much about the other books in the series. Mathews (who writes the Jane Austen mysteries under the name Stephanie Barron) brings the landscape of Nantucket to life in all its sights, sounds, and smells. She also brings in many fascinating facts about the island, some of them historical and some of them about everyday things like trash and landfills. Merry Folger is a strong, intelligent main character whom I quickly grew to like.

Woven into the investigation are scenes from Merry's personal life. That ex-Chicago cop who's now police chief on Nantucket is so obnoxious that I just had to roll my eyes and fume, and Mathews includes some mouth-watering scenes that will have dedicated foodies blissed out. Even though the members of the Murphy family didn't seem to be able to tell the truth, I had little trouble in deducing what was going on. But it certainly was great to visit Nantucket, and I'd go see Merry Folger again anytime!