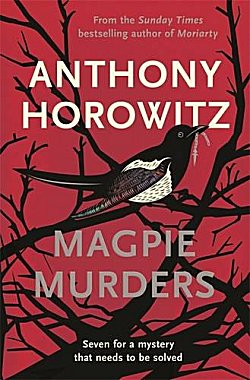 Opening Scene: A bottle of wine. A family-sized packet of Nacho Cheese Flavoured Tortilla Chips and a jar of hot salsa dip. A packet of cigarettes on the side (I know, I know). The rain hammering against the windows. And a book.

Editor Susan Ryeland has been given the manuscript of bestselling author Alan Conway's latest mystery, and she can't wait to read it. Having worked with the man for years, she's well acquainted with his detective, Atticus Pünd. Conway's main character-- and his books-- are an homage to illustrious writers such as Agatha Christie and Dorothy L. Sayers, and Conway's formula has been immensely successful. But this book is going to be like no other Conway has written, and Susan Ryeland will have to turn into a detective herself in order to straighten everything out.

Magpie Murders is a puzzle lover's dream. It contains a mystery within a mystery, and for the most part, I enjoyed every bit of it. The opening scene has Susan Ryeland settling in to read the manuscript of Conway's latest mystery. When she reaches the end, she finds that it's missing the final chapter where all is revealed. But she can't just call Conway and ask for those missing pages-- he's had a bad fall and is dead. Cloverleaf Books' future (and Susan's) depends on the sales of this book, and it is imperative that Ryeland finds that missing chapter.

Now Ryeland is a sleuth, looking for and examining clues. What happened to the last chapter of the manuscript? Was the author's death suicide or murder? The first half of Magpie Murders is Conway's manuscript. The thing is chockful of Christie references-- even someone like me who doesn't particularly care for Christie could find several of them unaided. Names, towns, buildings, anagrams... you name it, and it's probably there for you to cogitate upon. The second half is Ryeland's investigation, and I have to admit that I was more successful in deducing what had happened to Alan Conway than I was in figuring out what happened to the characters in his manuscript.

Yes, I did enjoy this book a great deal, but I didn't love it, and my reason may not make much sense to you. One of the reasons why I don't care for Agatha Christie is because, whenever I've read one of her books, I am overcome by a feeling of the author's smugness at being able to concoct such a perfect puzzle. I felt this same smugness from Anthony Horowitz... but not to the same degree, probably because the character of Susan Ryeland was the book's saving grace.

If you love Agatha Christie, puzzles, and enough details and red herrings to sink the world's largest fishing trawler, Magpie Murders is going to be your perfect cup of tea. Enjoy!