A Rising Man by Abir Mukherjee 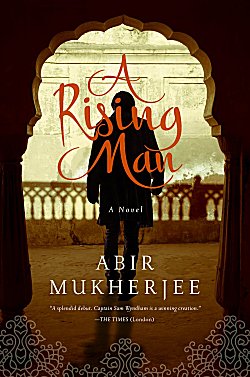 First Line: At least he was well dressed.

It's 1919, and former Scotland Yard detective Captain Sam Wyndham has just arrived in Calcutta. After his experiences during World War I, he is longing for a fresh start, but his very first investigation concerns the death of a British government official who was found with a note stuffed in his mouth warning the British to leave India, or else....

Wyndham is under pressure to solve the case before the streets of the city erupt into violence. He has two colleagues to help him: the arrogant Inspector Digby and Sergeant "Surrender-not" Banerjee, one of the few Indians to be recruited into the CID.

When I first picked up A Rising Man and began to read, I read it as I would any other historical mystery. I soon fell headfirst into a major roadblock: the slow-as-treacle pace. Fortunately, before I gave up and moved to another book, I realized that the setting of this book is absolutely fabulous and well worth the price of admission.

Mukherjee has written this book in such a way that readers get to see Calcutta in 1919 from several different points of view. It is a city-- and a country-- just beginning its quest for freedom in earnest. The vast majority of Indians do not wish to be a part of the British Raj. There are revolutionaries showing us why India wants its freedom. There are British bureaucrats who-- above all else-- wish to maintain their precarious status quo. There are Indians like Sergeant Banerjee who want the British out but want to learn how to govern and how to fight crime first. And into this mix comes Sam Wyndham, who's survived a long meat-grinder of a war with few illusions left. He's fought side by side with brave and honorable men of all races and creeds, so he doesn't always see situations from his superiors' points of view. And speaking of points of view, there are several that some readers may find uncomfortable.

Once I settled down to read this book as historical fiction rather than as a mystery, I was much happier. Yes, the mystery is a good one, and Sam Wyndham is a finely drawn character, but it is the city of Calcutta that steals the show. I'm looking forward to Abir Mukherjee's next book with a great deal of interest.